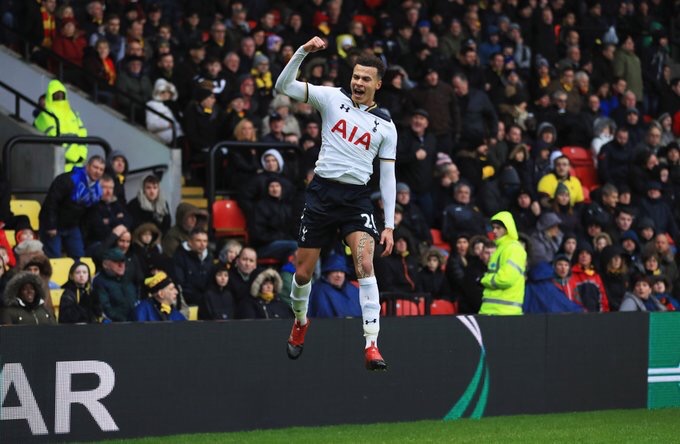 Spurs recorded their second 4-1 away win in four days as they beat Watford at Vicarage Road. Much like against Southampton and last season, it was the Harry Kane and Dele Alli show, who fired Spurs into the top four for the first time since October.

Spurs made four changes following the victory against Southampton, with Heung-min Son, Kevin Wimmer, Kieran Trippier and crucially, Toby Alderweireld returning to the side. With the changes in personnel came a change in formation, with Spurs reverting to a 3 at the back. For Watford, a depleted squad meant they were forced into changes following their draw with Crystal Palace. Craig Cathcart came in for his first start since September, along with Doucoure with his first start of the season.

Spurs dominated the game almost from the first minute, and could have been awarded a penalty inside the opening 10 minutes. Christian Eriksen smashed the ball against the hand of Etienne Capoue, although from a close distance, a penalty could have and probably should have been given. Dele Alli provided another warning shot to Watford, crashing a fierce drive against the bar from 25 yards out. A minute later, Spurs were ahead, and deservedly so. Kieran Trippier slid a ball brilliantly into Harry Kane from a tight angle, who fired past Gomes at his near post. A great finish from Kane, but Gomes will certainly be disappointed to be beaten at his near post. Just over five minutes later, and the Trippier-Kane combination worked again. Trippier whipped in a brilliant curling ball from the right and Kane snuck in between the Watford centre halves to prod home his second of the match. Huge credit should be given to Trippier whose ball was on a plate for Kane to strike. It was soon three for Spurs, just before half time. Younes Kaboul failed to clear woefully from Harry Kane’s cross, leaving Dele Alli to curl in for his seventh premier league goal of the season. Shocking defending from Kaboul against his old club, really summed up Watford’s half, in what was one of the most one sided halves all season.

If you thought things could not get worse for Watford, they soon did. It seems Watford’s defence was still recovering from New Year’s Eve celebrations as Harry Kane’s cross met Dele Alli unmarked to get his second goal of the game. Again, horrific defending from Watford. With the game all but over, Pochettino could afford to rest his stars for Wednesday’s crunch match against Chelsea, with Alli, Rose and Kane all coming off. During the final minutes of the game, Watford finally woke up and managed to reduce the deficit. Kaboul managed to bundle in a free kick at the back post, taking a bit of embarrassment away from his woeful defensive display.

Walter Mazzarri will certainly be concerned with the way his team defended all game, which was amateurish for most of the game. From a Spurs perspective, Pochettino will feel his side are back to their best at the right time for the visit of Chelsea to the Lane on Wednesday.