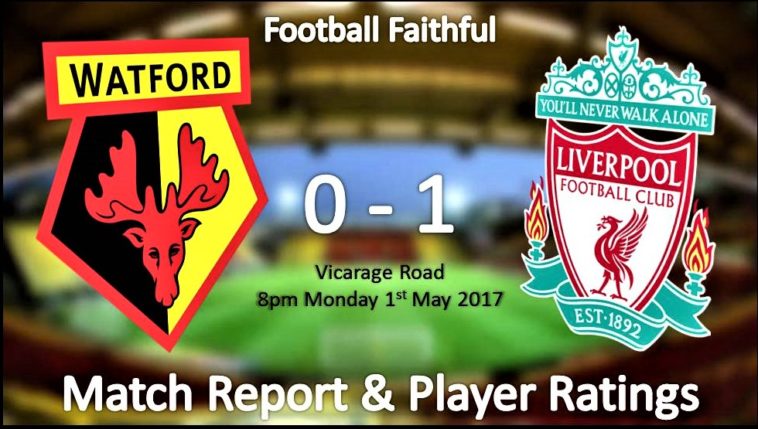 A crucial match for Liverpool saw them take advantage of their rivals slipping up but Watford put up a very good fight and could easily have dented Liverpool’s top four chances on another day.

Watford came in to this match on the back of a disappointing defeat to Hull last time out. Walter Mazzarri made one change from that team with the hopes of adding another good result to a recent string of home wins. Adrian Mariappa came in for the injured Jose Holebas.

Valon Behrami recovered from a hamstring injury but was only deemed fit enough for the bench by Mazzarri. However Craig Cathcart couldn’t recover in time as he missed the match.

Jürgen Klopp decided to keep faith in the team from last time out despite losing at home to Crystal Palace.

Adam Lallana recovered from a groin injury which had kept him out for some time but he would have to start from the bench as he looked to regain match sharpness. Daniel Sturridge also returned from injury after missing the match against Crystal Palace. He was feared to be out for the season but recovered much faster than expected.

The first half took a long time to get going as much of the play was broken up by small fouls. The first real talking point of the match came 10 minutes in as Coutinho clashed with Mariappa. After hobbling around the pitch for a few minutes he was unable to continue so was substituted for Lallana.

Lallana’s introduction came much earlier than Jürgen Klopp would’ve liked but with Liverpool’s injury problems mounting he had little choice.

Just 6 minutes later Watford had their own injury problems as Britos was forced off. The injury didn’t look too serious but he was replaced by Kabasele as Watford looked to keep their strong back three.

With the first half nearing a close you would be forgiven for thinking this was a friendly as both teams lacked intensity and energy. In the final minutes of what had been so far one of the dullest halves all season Liverpool created their first real chances.

In the 42nd minute Lallana unleashed a fantastic dipping shot at goal on the half-volley after Gomes punched clear from a corner. However Watford were fortunate to be let off the hook as unmarked Lallana’s shot crashed off the underside of the cross bar and was eventually cleared.

In injury time Liverpool finally made the breakthrough. Lucas chipped a ball in to the box which was met by Emre Can as he produced an outstanding over-head kick which found the top left corner. Watford’s defence had been very strong in the first half but they were not expecting that from Can and were left helpless.

The second half continued in the same vain as the first half as both teams struggled to create any excitement in this match. It wasn’t until the 72nd minute that the first chance of the second half came. Deeney drifted off the back of Lovren and found himself in space, were it not for the linesman raising the offside flag wrongly it could have resulted in a good chance for Watford.

Thankfully the next chance of the match came soon after in a game that was difficult to get excited about. Janmaat tried a highly ambitious 40 yard shot following a Watford corner but his shot clattered in to the onrushing Liverpool offense as they launched a counter attack. Lallana found himself with a chance to shoot from the edge of the box but put his effort wide whilst under pressure from Watford.

Klavan was brought on as the game neared its end as Liverpool looked to hold on to their 1-0 lead. The man he replaced was Lallana who had previously been substituted on.

Despite Liverpool looking to see-out their victory Matip somehow made his way in to the opposition penalty area and forced a good save from Gomes.

As the game entered injury time Sturridge, who had come on for Origi, created a fantastic chance for himself as he dribbled in to the box and unleashed a hard right-footed shot at goal which Gomes again saved well.

With just seconds left in the game Prodl hit a thunderous strike at goal from close range following a wide free kick. He was very unlucky to hit the cross bar and could easily have snatched a draw at the end for Watford.

Watford deserved a lot of credit for their performance in this match. The back three outclassed Liverpool’s offense for much of the match. To say Watford lacked ambition in this match would be doing them a disservice. Whilst they may have sat deep for most of the game they were more than willing to get forward when the opportunity presented itself, particularly in the second half.

Even when Watford pushed forward in the final 15 minutes of the game as they chased an equaliser they still managed to thwart Liverpool from creating many opportunities. It was clear to see how Watford had managed to keep three clean sheets in their last three home games.

Watford made this game very difficult for Liverpool in what was a crucial game for the Reds if they are to get top four. The Watford players were definitely not on their holidays just yet as they proved strong competition in a game that could have gone their way on another day.

Man of the Match: Emre Can