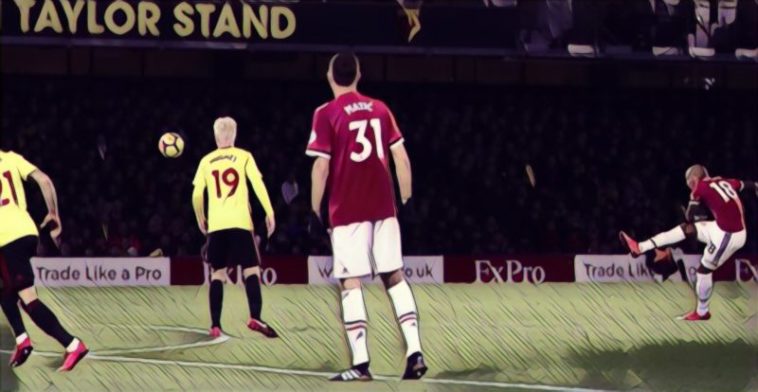 Manchester United winger turned full-back Ashley Young was so desperate for a goal that he took to twitter last weekend to beg the FA to award him with the deflected strike that gave Man United a 1-0 win over Brighton at Old Trafford. The 32-year-old had not scored for United in 18 months, and was devastated when the games governing body refused his request and classed the goal as a Lewis Dunk OG.

Young would not have to wait much longer to get on score sheet however, as he bagged a brace tonight against Watford at Vicarage Road which was the first time the England international had scored two goals in a Premier League game since March 2012.

It was obviously a massive surprise that a player starting at left-back netted twice, but an even bigger surprise was in the nature of his two strikes.

And more than 14 years since his first goal for Watford!#MUFChttps://t.co/6yJaJoG993

Ok Ashley, fair play, that’s your scoring duties over now for another couple of years we all thought, but then came this absolute worldy of a free-kick …

Of course everybody in the Ground was dumbfounded by the sight of Young channeling his inner Ronaldo, and none so more than United manager Jose Mourinho who’s reaction to his players wonder strike is simply priceless …

It wasn’t long after that that Anthony Martial slotted home to give United a 3-0 half-time lead, and we all thought that Mourinho would shut up shop, and easily walk away with the three points, therefore restoring some form of normality to proceedings.

No, no chance, there was plenty more drama to come. Troy Deeney and Abdoulaye Doucouré pulled a couple of goals back for the Hornets to set us up for a tense finish and a potentially epic comeback by the home side.

Until Jese Lingard, another player who has had his fair share of critics over the years, decided to try and out do Young and went on a 70-yard Messie-esque solo run before slotting a shot past Heurelho Gomes from the edge of the area to seal the victory for The Red Devils.

The Worlds gone mad, you may say, and in all honesty you wouldn’t be far wrong! Anyway, its a massive three points for United as they chase Manchester City at the top of the Premier League, and the perfect confidence booster ahead of their crunch game against Arsenal at the Emirates this coming Saturday.