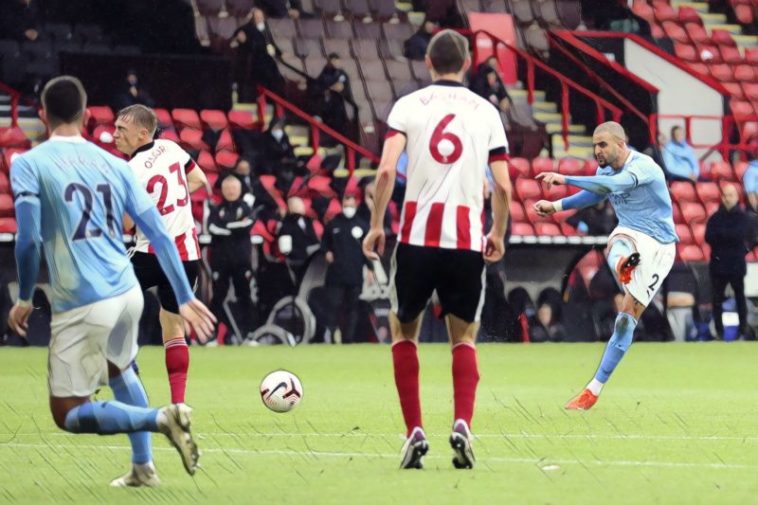 Walker scored the only goal of the game against his former side as City overcame the stubborn hosts to secure three points, Pep Guardiola’s side largely dominating the proceedings but faced with an organised Sheffield United still seeking their first victory of the Premier League season.

City move up to seventh in the division after keeping a third clean sheet in their past five fixtures in all competitions, with Walker – who failed to celebrate his sweetly struck strike at the club where he came through the academy ranks – hailing his side’s defensive performance and the impact made by summer signing Dias.

The centre-back signed in a club-record deal from Benfica during the summer and has made a solid start to life in English football, match-winner Walker quick to praise the Portugal international following another assured display.

“I’m happy to get on the scoresheet and obviously happy to get the three points, which was the main thing coming up here,” Walker told BT Sport.

“They’re well drilled. Everyone knows their position and they’re a tough team to break down, but luckily enough I came up with the goal.

“My mum and dad live here, so if I’d celebrated I’d have got a lot of stick. I’m a Sheffield United fan, so I couldn’t celebrate.

“I’m enjoying my football. We don’t sit back and defend. We want to score three or four, but it’s great to get the clean sheet on the board as well.

“Defensively we’ve done fantastically well, especially Ruben [Dias] since he’s come in. Whoever steps in, they’re all going to put in top performances.

“There was always going to be a hangover [from last season]. It’s just what we’re dealing with at this moment in time.”