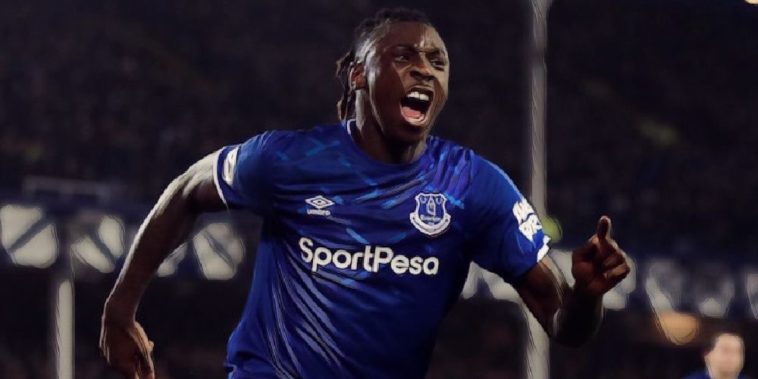 Theo Walcott has discussed how Everton teammate Moise Kean left him impressed during the club’s 2-2 draw with Newcastle at Goodison Park.

The Italy international scored his first Premier League goal for the club since his move from Juventus last summer, Kean controlling Bernard’s through ball before finishing cooly to open the scoring during the pulsating draw with Steve Bruce’s side on Tuesday night.

It’s been a difficult start to his career in English football for Kean so far, though the 19-year-old delivered a much-improved performance having been handed his second consecutive start under Carlo Ancelotti.

Aside from his goal, Theo Walcott admits he was pleased to see the teenager’s workrate and desire to regain possession against Newcastle and is hopeful that now he is off the mark, that the forward will gain confidence as he looks to establish himself as a key figure on Merseyside.

“He is working really hard in training every day, we see some mad stuff he does with the ball and what he can do, the power he has,” Walcott told the official Everton website.

“What I liked against Newcastle was his workrate, winning the ball back, working hard for the team and being a solid unit up there along with Dom [Calvert-Lewin], who has been so reliable for us all season.

“I am pleased for Moise. He took the goal well and it will bring more and more confidence.

“He is a young kid – we just need to let them develop and enjoy their football and the best will come out.

“It will take time coming from Italy… he will be fine, he is working hard and has a good young team behind him.”

Kean’s first Everton goal came in his 18th Premier League appearance for the Toffees, though just five of those have come from the start, and Walcott is now hopeful the ‘confident’ youngster can continue to fire as he adapts to the demands of English football.

“The first goal is always the hardest and he has that out the way now,” said Walcott.

“He is a very confident kid, he likes the ball at his feet and just enjoys playing football.

“He is only 19, to come to a foreign country and play in the Premier League, the best league in the world, is difficult.

“But he showed what Moise Kean is about [against Newcastle]. We see it in training and we’ve seen it in that game.”