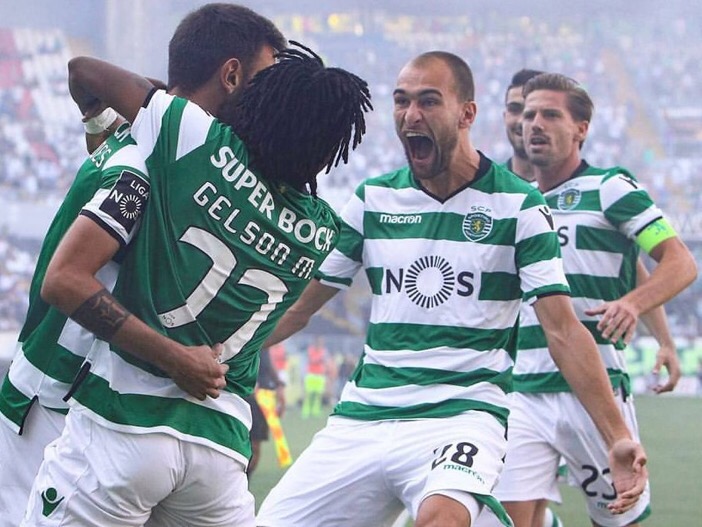 Sporting Lisbon flood the stadium with goals and lay waste in Guimarães.

Sporting turned their recent good form into a great form after nailing a collosal 5-0 victory against Vitória de Guimarães.

The match had a very promising start for the Lions, when Bruno Fernandes unexpectedly banged the ball from outside the box, resulting in a stunning top left corner nominee for goal of the season.

The same player had another opportunity at a stunner after he volleyed the ball from the edge of the box, missing the goal by a whisker.

Vitória finally had their first goal chance with a crossed ball that proved difficult to secure for Rui Patrício.

A free kick close to the corner flag for Sporting was then executed perfectly. Acuña crossed the ball directly into Dost’s unmarked head and it traveled into the back of the net.

Just a mere minute afterwards, the away team attacked again with a brilliant pass from the half-way line to Coentrão who easily assisted Dost to a simple tap-in goal.

It was close to the end of the first half when Vitória de Guimarães got their first shot on target. Positioned directly in between the goalposts, Raphinha attempted the direct free kick goal. He would have succeeded with a marvelous shot if it wasn’t for Patrícios’ vigilant gloves.

Bruno Fernandes had a third attempt at scoring with a short distance shot, saved magnificently by Miguel Silva.

The match reached half-time with a delighted group of Lions and a band of low-spirited players praying for a miracle. It was far from over though, with both teams recalling the turn of events of last season’s match. In that game, Sporting had been leading by 3-0 against Vitória, but the match somehow ended up as a 3-3 draw.

With Vitória placing their hope in a repeat of that match, the home team tried to surprise the opposition with an early shot from the edge of the box that narrowly missed the goal.

Their hope didn’t last long though as Bruno Fernandes surprised again with a second nominee for goal of the season. From far outside the penalty area, the Portuguese produced a sensational shot, rocketing the sphere into the bottom left corner.

Following the goal, Vitória lost all hope and did nothing to achieve even a consolation goal. But Sporting, though satisfied with their performance, continued to plow the attacking third in search of another goal.

With 10 minutes to go, the man of the moment took another shot at scoring. Bruno Fernandes, in entering the penalty area, struck the ball, producing something between a cross and a chipped shot. It was closer to the latter, but the shot was ultimately stopped by the crossbar.

In the 85th minute, the Leões got what they wanted. In a great play between six different players, Adrien “The Captain” Silva, managed to net the final goal and increase the score to a monstrous 5-0.

Gelson still attempted to secure the sixth, when he found himself in a one on one situation with the keeper, but another great save by Miguel Silva stopped him in his tracks.

Vitória de Guimarães were finally put out of their misery as the final whistle blew. The home players left the pitch with heavy hearts, while the Lions celebrated their huge triumph and amazing performances.

This match will definitely serve as a huge motivation for Sporting’s Champions League test against Steaua Bucharest, after their disappointing first leg match. It also serves as proof that the Lisbon club is a serious title contender this year.

Sporting Lisbon leave the third round of the league with three consecutive wins and no conceded goals. Vitória de Guimarães, however, have conceded a total of 10 goals in their last three matches.