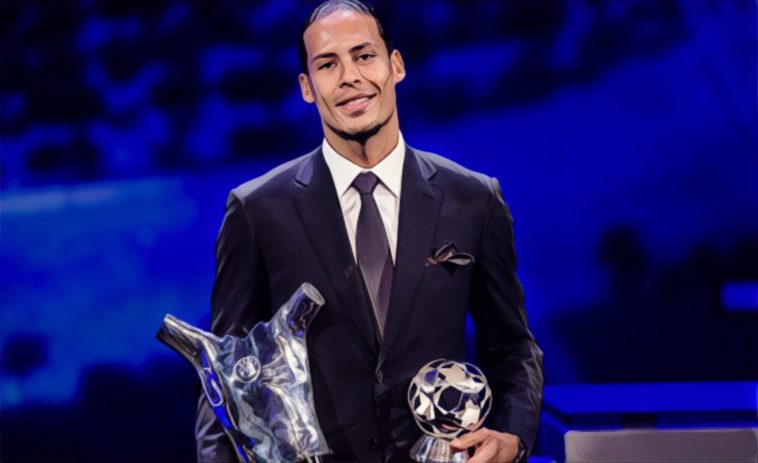 Virgil van Dijk was named the Uefa Men’s Player of the Year after guiding Liverpool to their sixth Champions League triumph at the end of last season, while Lucy Bronze picked up the women’s equivalent.

The Dutch defender won the award ahead of Barcelona’s Lionel Messi, who lost out on a place in the competition’s final to the Reds after leading the tie 3-0 after the first leg.

Van Dijk was in imperious form at the centre of Liverpool’s defence last year, as the side kept 21 clean sheets on their way to a record points tally (97) for a team not to win the Premier League title.

Their disappointment at not winning a first league trophy in 29 years was offset by lifting the Champions League this past June, following a 2-0 win over Tottenham Hotspur.

It was widely felt that the Merseyside outfit would not be nearly as solid at the back in the 2018/19 campaign without their talismanic centre-back, who cost a then-record transfer fee for a defender when Liverpool bought him from Southampton for £75 million.

Van Dijk performances have been deemed so good that he’s seen as the best central defender in the world, good enough to beat the world’s greatest player to Uefa’s top gong in the men’s game.

Last season Barcelona’s attack moved through Messi more than any previous year, despite the fact that the Argentine playmaker is now 32-years-old and reaching his final years as a footballer. No single player made a greater contribution to their team’s attacking function than he did, but van Dijk’s form both domestically and in Europe were worthy of distinction too.

English footballer Lucy Bronze was adjudged to be the best Women’s Player of the Year ahead of France’s Amandine Henry and Norway’s Ada Hegerberg.

The former Manchester United striker gave a very Eric Cantona acceptance speech which he began by quoting William Shakespeare — “As flies to wanton boys are we to the gods” — before going on to say this:

“Soon science will not only be able to slow down ageing of cells, it will fix cells and so we will become eternal. Only accidents, crimes, wars will kill us but unfortunately crimes and wars will multiply. I love football. Thank you.”

Eric Cantona has just won the 2019 UEFA President’s Award and accepted it with a speech that rivals the seagulls following the trawler. Thank you, Eric.
pic.twitter.com/pDqNiKaT5o

As you can see, the crowd was just as confused as the rest of us.