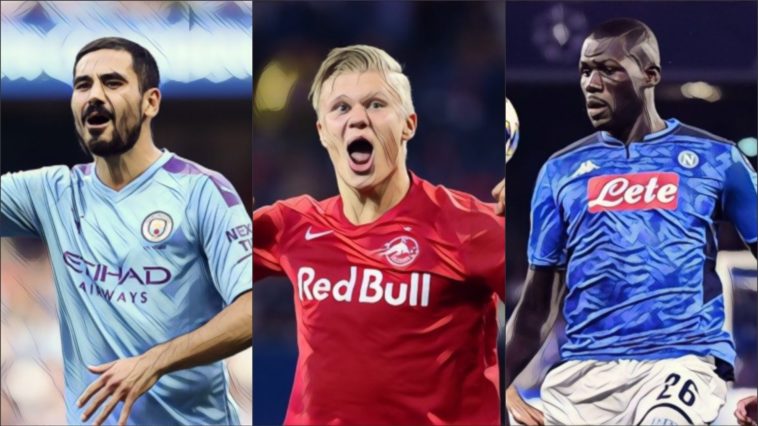 We’ve picked the best XI from matchday 1 of the Champions League group stages, putting together a team of the week from the competition’s most impressive performers.

It’s not very often a goalkeeper is the best player on a pitch that has Lionel Messi on it. Granted, the Argentine was only on as a substitute late in the game, but without Ter Stegen then Barcelona would almost certainly have lost against Borussia Dortmund.

The German shot stopper grabbed the headlines for saving a penalty from Marco Reus, but he made four super saves in total on the night which saved his team. Despite having the majority of the ball, the Catalans were outshot by their hosts 14-7, leaving it all to Ter Stegen to keep them in the tie.

@mterstegen1 has saved four of the six penalties he has faced in the Champions League.

The Number 1️⃣ in 🇩🇪 pic.twitter.com/f0A3HjmHp7

The Barcelona goalkeeper also received some lofty praise from an unlikely source.

Manuel Neuer step aside, there’s a new German supremo between the sticks.

In their 2-0 win over Liverpool, Napoli employed their excellent defensive structure to a tee, but Koulibaly was a king among men in the Neapolitan backline. In the battle of the world’s greatest central defenders, the Senegalese beat Virgil van Dijk handily.

The Dortmund defence restricted Barcelona to some mediocre chances on Tuesday night and deserved to take all three points at the Westfalenstadion. Hummels was a rock at the heart of that backline, contributing an absolutely monstrous performance for the German side.

Here are some of his impressive statistics from the night:

Not only did the PSG defender put in a solid shift at the back, helping to restrict Real Madrid to no shots on target, but Juan Bernat was a force going forward too.

Yes, another left-back, but it’s my team my rules, and I don’t think you’ll find two full-backs who had better games this week than Bernat and Ajax’s Nicolás Tagliafico.

Lille put the Dutch champions under pressure at times, but the defence held up and the Argentine put in a Man of the Match display. He provided a goal and an assist in the 3-0 victory, while also making eight tackles, winning three aerial duels and completing one dribble.

Tagliafico for Ajax vs Lille:

A stellar performance from Ajax's left back. pic.twitter.com/9JAI0cAh2o

The former Everton midfielder not only shielded the PSG defence well, helping to keep Eden Hazard, Gareth Bale and Karim Benzema quiet, he also had a monster game in the attacking third as well.

Gueye was getting forward a lot, winning the ball high up the pitch to create goal scoring opportunities for his teammates, and set up Angel Di Maria’s second goal of the night. Thiago Alcantara had an equally excellent night in Bayern Munich’s 3-0 win over Red Star Belgrade, but the Senegalese wins it by virtue of the calibre of opposition.

One of the few times we’ve seen the German has really taken charge of a game, Gundogan drove Manchester City’s attack in a dominant display from the Premier League champions.

The midfielder played a part in each of City’s three goals: his first-half strike cannoned back off the post and into the grateful feet of Riyad Mahrez; his terrific finish was responsible for the second, and he intercepted the ball in the lead-up to the third.

Angel Di Maria is a big fan of scoring against his old teams. He did it last year against Manchester United at Old Trafford, and he did twice against Real Madrid on Wednesday night. His first goal was a nice finish, but his second was even better, beating former Chelsea goalkeeper Thibaut Courtois from range.

You got to love the energy from a person who willingly wears the number 99 and goes out and scores a hat-trick in the Champions League. Oršić tore apart the Atalanta defence in a terrific display from the Croat outfit, winning the game 4-0.

The Serie A side had their chances in the second-half, but an absolutely awful opening 45 minutes exposed their defensive deficiencies badly.

Mislav Oršić is the first Dinamo Zagreb player to score a Champions League hat-trick in the #UCL era.

History has been made. pic.twitter.com/XCZNJPayNj

The son of a certain former Leeds United and Man City midfielder, Erling Håland shot his name into the record books this week with a hat-trick for Salzburg against Genk on his Champions League debut, the first time we had seen someone do that since Wayne Rooney in 2004.

Born in Yorkshire, the striker looked absolutely phenomenal and could be the next big thing in European football. He previously played under Ole Gunnar Solskjaer at FK Molde, where he was dubbed “the manchild” for being so big despite being a teenager.

If Gareth Southgate was hoping to call up the young talent to the England squad, then he’s out of luck, as Håland has already featured in two competitive matches for Norway’s senior team.

Ten football figures who raised their sons to be footballers

After contributing a goal and two assists in Salzburg’s 6-2 demolition of Genk, Hee-Chan Hwang became the second youngest South Korean to score in the Champions League. If the Austrian outfit catch the right breaks, they could be this year’s Ajax.

Our Champions League Team of the Week for Matchday 1:

See Also: The five Irishmen to have won the Champions League