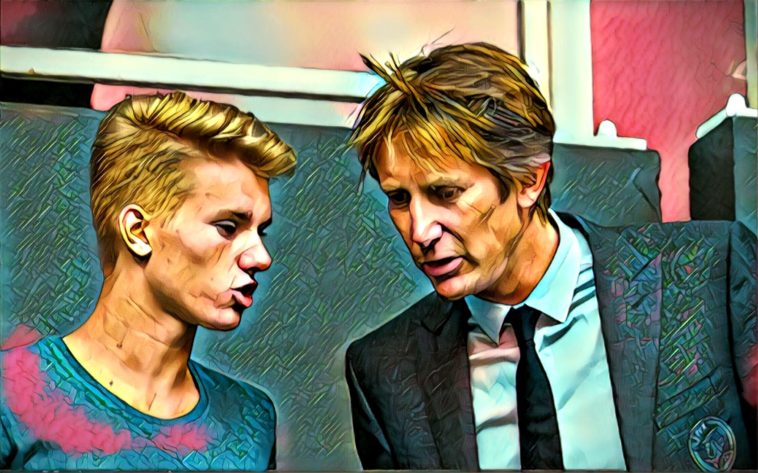 The young footballers trying to follow in the footsteps of their fathers by making a career of the game.

Legacy can a powerful thing. It can define one’s entire life. It can inspire others. Or it can weigh heavy on one’s offspring.

You rarely see footballers pass on their talent to their sons and daughters, no matter how good they were in their career. Paulo Maldini had one for a father, and he now has two sons at AC Milan, but the former Italian defender is an exception to the rule.

In most instances, they do not reach the same heights, or even make it professionally, yet there are still plenty of footballers’ children who litter the academies of clubs in the Premier League and beyond. We’re not here to say there is an element in nepotism in any of these cases. We’ll let you make up your own mind.

Patrick Kluivert’s time at Newcastle United is a side note to the outstanding career he had playing for Ajax, AC Milan, and Barcelona, as well as the Netherlands, but he did score 13 goals for the Magpies in his solitary season on Tyneside.

He has raised a fine footballer of a son in the form of Roma winger Justin, who also started out his career at Ajax. The 19-year-old has scored 17 goals in his senior career thus far.

Following in the gloves of his father Edwin, Joe van der Sar plays between the ticks for RKC Waalwijk, having previously played for Ajax and ADO Den Haag. He also spent a short time in the Manchester United academy alongside Marcus Rashford.

The FC Nantes reserve team midfielder comes from rich footballing stock: his dad is Youri, the World Cup and Euro 2000 winner with France; his grandfather was Jean, a French international who featured for PSG, Marseille and Lyon; his uncle Denis is a football agent; while his aunt Misha was a well travelled footballer who once lined out for Luton Town.

Aron, Andri Lucas (pictured above) and Daniel have all been on the books of Barcelona, although Daniel and Andri are now with Real Madrid, while Aron is playing in Italy’s third tier for Ravenna FC. Former Chelsea striker Eidur Gudjohnsen famously made his Iceland debut against Estonia by replacing his father Arnor as a substitute.

The son of Phil, Harvey Neville started his youth career at Man United, because of course, he did. He also spent time at Manchester City and Valencia, before rejoining United in 2018. He plays on the right side of midfield.

The son of golazo merchant Tony Yeboah, Kelvin currently lines out for WSB Wattens in the German second tier. The Ghanaian centre-forward, who turns 19 in May, has made 10 appearances and scored one goal this season. His dad was a prolific goalscorer in the Bundesliga and Leeds United in the nineties.

Extraordinary how many sons of managers end up in their club’s academies, isn’t it? Mauricio’s boy Maurizio features for the Spurs U18’s squad and can play anywhere across the front three, but is primarily a right winger.

The Spanish-born teenager also competed in the first game at the new Tottenham Hotspur Stadium, where he played against Southampton’s youth side.

After Justin Kluivert, Angus Gunn has arguably had the best start to his young career of the people on this list. The son of former Norwich City goalkeeper Bryan Gunn, the 23-year-old also lined out for the Canaries on loan from Man City in 2017-18.

Last summer he moved in a deal worth €11m to Southampton, where he has since made seven league appearances and kept three clean sheets. Gunn is eligible to line out for Scotland like his father did, although he has played for England in every age group except for the senior team.

The Norwegian youngster joined Red Bull Salzburg for €5m last summer after impressing for Molde FK. Erling has only made one appearance in the Austrian Bundesliga this season, but he has played five times in the Europa League when he provided four goals and an assist. His father Alf-Inge played for Nottingham Forest, Leeds United and Man City, before Roy Keane ended his career prematurely.

I’ve cheated a little bit to get this list to an even number, but I’m expecting that most of haven’t even gotten this far. Well done you for doing so! Jose Jr. was on the books at Inter Milan and CD Canillas — a feeder team for Real Madrid — as a child, before joining Fulham in 2013. The Barcelona-born goalkeeper signed a two-year scholarship in 2016, but left the club halfway through. He has been without a club ever since and his football career appears to be over.