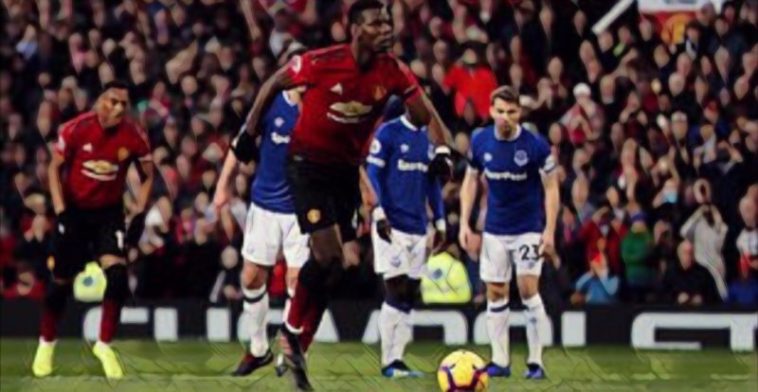 If you weren’t watching Manchester United’s 2-1 win over Everton yesterday, you will have been spared from seeing Paul Pogba take the most ridiculous run up for a penalty that you have ever seen.

The 25-year-old midfielder stepped up to take the first-half spot-kick at Old Trafford, placing the ball on the spot, before embarking on a 28-step run-up before striking the ball, only to see his effort saved by Everton and England’s penalty specialist, Jordan Pickford.

Fortunately for Pogba, his blushes were spared where Pickford’s save rebounded straight back to him and allowed him to redeem himself by tucking the ball home to give Manchester United the lead.

However, the fact that he scored didn’t stop Twitter users taking the piss out of the Frenchman’s stuttered run-up.

Things that can be done during a Paul Pogba penalty run up.

Graeme Souness when Pogba did that run-up pic.twitter.com/NJIHsbRbsq

Even Manchester United’s Luke Shaw got in on the action to take the piss out of his teammate.

Make a comeback in your career and renew your contract. #ThingsYouCanDoDuringPogbasPenaltyRunUp pic.twitter.com/sxGx6C1i11

This eagle-eyed twitterer pointed out that in the time it took Pogba took to walk six yards, Usain Bolt would have managed to win the 100m sprint.

Please Paul, for all of our sakes, just take a normal penalty.