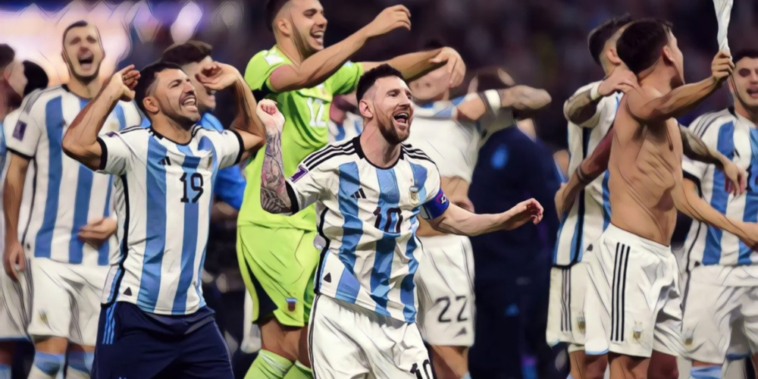 Argentina are the new world champions after winning the 2022 FIFA World Cup, with the South Americans celebrating success after beating France in a thrilling final.

It’s a first triumph on the world stage for Argentina since 1986 and one that football fans across the planet are revelling in as Lionel Messi ends his wait for the sport’s biggest prize.

We look at how the world of Twitter reacted to Argentina’s World Cup win in Qatar.

🇦🇷 Yes, the celebrations in the Argentina dressing room were as beautifully chaotic as you’d imagined… pic.twitter.com/jqYwi5OkMF

Just look at those scenes. There will be some sore heads in Buenos Aires this morning, but rarely has a hangover been this worth it.

🇦🇷 This footage of Buenos Aires as Argentina scored their winning penalty will probably give you goosebumps.

The image that will last a lifetime. Lionel Messi and football, completed it.

Teammate Rodrigo De Paul has often been closer to the Ballon d’Or winner than opposition players this tournament.

While this is Argentina’s success, it’s impossible to overlook the narrative of Messi finally winning the World Cup.

It’s been an incredible tournament for the seven-time Ballon d’Or winner, who was a fitting winner of the Golden Ball.

Leo Messi is the first player to score in EVERY knockout game of a men’s World Cup.

2 – Since the award was officially introduced in 1982, Lionel Messi is the only player to win the Golden Ball twice at the World Cup (2014, 2022). Levels. pic.twitter.com/3XNAlf2tnN

20 – With 12 goals and 8 assists, Lionel Messi's 20 goal involvements are the most of any player on record at the World Cup (1966 onwards). Greatest. pic.twitter.com/wU7JTyfKWS

From the footballing world, the good-will towards Messi was evident.

Mario Gotze – the man who scored the winner for Germany against Argentina in the 2014 final – was another who celebrated their success.

It all ended happily ever after. 🥹❤️

Adorning an Argentina shirt, Sergio Aguero channelled his inner John Terry after joining in the celebrations, though the ex-Chelsea defender was less than impressed with the retired Aguero’s half-hearted attempt…

If your going to do it, at least go for it and put the shin pads and boots on.🤣🤣🤣🇦🇷🏆💙 pic.twitter.com/Bn61Qdqim5

While Emi Martinez, named as the Best Goalkeeper at the Tournament, chose to celebrate in ‘unique’ style with the trophy…

As Argentina bask in their success, it’s worth remembering the contribution of Kylian Mbappe, who singlehandedly dragged France back onto the most gripping World Cup final in memory.

Messi might be the greatest, but Mbappe is on his own route to greatness.