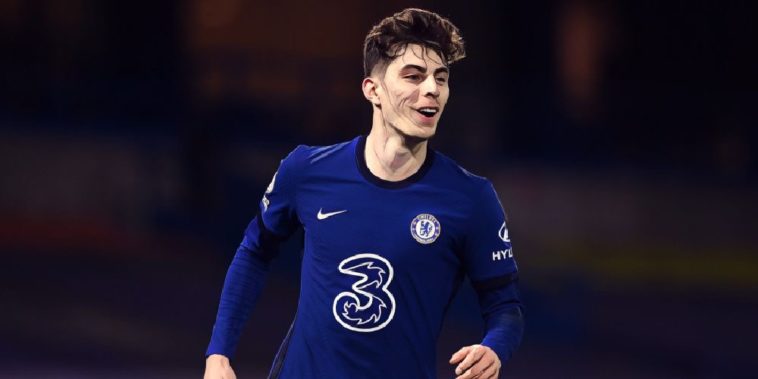 Chelsea took another step towards securing a top-four finish with a 2-0 win over fellow hopefuls, Everton, a game in which Kai Havertz played a starring role.

The two sides came into the game separated by just a point, Chelsea in fourth and Everton in fifth, the race for next season’s Champions League looking to be an exciting one.

Chelsea have been excellent since the appointment of Thomas Tuchel in late January, and they took the lead just after the half-hour mark. Callum Hudson-Odoi slipped Marcos Alonso down the left-channel with the Spaniard playing the ball into the box towards Kai Havertz. The German attempted a first-time finish, and while his effort was going wide, a deflection off of Ben Godfrey send the ball goalbound to leave Jordan Pickford helpless.

Pickford produced a smart save down to his right five minutes before the interval to deny Marcos Alonso, while Havertz put the ball in the back of the net again 10 minutes after the break, taking the ball down before swivelling and firing past the Everton ‘keeper, only for the referee and VAR to judge that the German had controlled the ball with his arm.

Chelsea would however double their advantage just after the hour mark, and once again, Havertz was involved. The summer signing got in behind the Everton backline following a ball from Matteo Kovacic from deep, knocking it past Pickford and being brought down by the England number one. Regular penalty taker Jorginho stepped up and rolled the ball home from the resulting spot-kick, sending the ‘keeper the wrong way.

Everton had limited opportunities throughout the game as Tuchel’s side controlled the vast majority of the match, and speaking afterwards the German was delighted with his side’s performance, particularly in the second half.

“We deserved to win,” he told BT Sport. “It was a very difficult first half but we controlled it completely. Second half we increased our level and had a lot of dangerous attacks.”

Kai Havertz has endured a difficult time since moving to English football in the summer, though Tuchel played his compatriot in a false nine role, a role the 21-year-old seemed to relish.

“You see the quality of the players and the club. It is a pleasure to be on the sideline and work with the team. Everybody in the club is doing everything to compete at this level.”

Next up for Chelsea is an away trip to face Marcelo Bielsa’s Leeds next weekend.