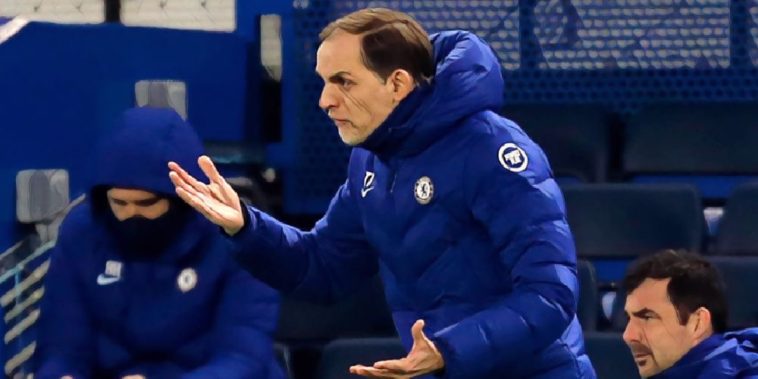 Chelsea missed out on the chance to move into the top four as they played out a 0-0 draw against second-placed Manchester United at Stamford Bridge.

Chelsea started the brighter and slicker as they looked to climb into the top four, though Manchester United looked a threat with the pace of Rashford, Greenwood, James and Fernandes upfront.

Manchester United would have a strong shout for a penalty turned down, video footage showing the ball appearing to strike Callum Hudson-Odoi’s raised arm inside the box, and despite referee Stuart Atwell being advised to review the pitchside monitor, he perhaps surprisingly opted to stick with his original decision.

Despite the lack of clear cut chances in the first half, it was actually a rather entertaining first 45 minutes, with both sides looking to press high.

Chelsea had the first big chance of the second period, Hakim Ziyech’s strike being met by the strong outstretched right arm of David de Gea, before Luke Shaw put in a fine block from Reece James’ rebound.

Both sides enjoyed periods of attacking dominance throughout the game, though a combination of some organised defending and a disappointing final ball saw the two sides have to settle for the second goalless draw of the season, though Thomas Tuchel felt his side were ‘closer to winning it’.

“It was a high-quality game between two very strong teams,” he told Sky Sports. “We suffered in the first half but overall it was an even game. In the second half I thought we were really strong.

N'Golo Kanté made more tackles (7) and more interceptions (4) than any other player on the pitch during Chelsea vs Man Utd.

LOOK AT THE HEAT MAP. 😳 pic.twitter.com/NsoPSxGlzr

“I thought we were closer to winning it, but there was a lot of quality on the pitch. Performance-wise I’m satisfied. We defended very well in the last line and I’m very happy with that.

“We were not good enough in the first half to attack the spaces. To find the solution was not always easy and we lost a bit of confidence with some easy ball losses.

“We said at half-time not to worry. We changed to a 5-3-2 to have higher ball recoveries and to regain confidence, and the boys did that very well. We were very close to winning.

“We take what we got. I’m absolutely happy. Against a team like Man United you don’t get many chances.”

The German coach was asked about the first half penalty review that went in his side’s favour, though the former PSG boss was confused as to why the referee was sent to the monitor in the first place.

🧐 Would YOU have given a penalty for handball? pic.twitter.com/fy6ZoyaLU7

“How can this be a VAR intervention? The player in red (Mason Greenwood) plays the ball with the hand and then we are checking for a penalty? Why does the referee have to see this?

“I’ve seen it on the iPad, I don’t understand why the referee has to check it but I’m glad it was no penalty. That would make it even worse.”

Next up for Chelsea is another big game against a top four rival, the Blues travelling to face Liverpool in the Premier League in midweek.

Read – Five of the Best games between Man Utd and Chelsea

See also – Tweets of the Week: Goal celebrations in slow mo, Pep’s jacket, and a touch of class