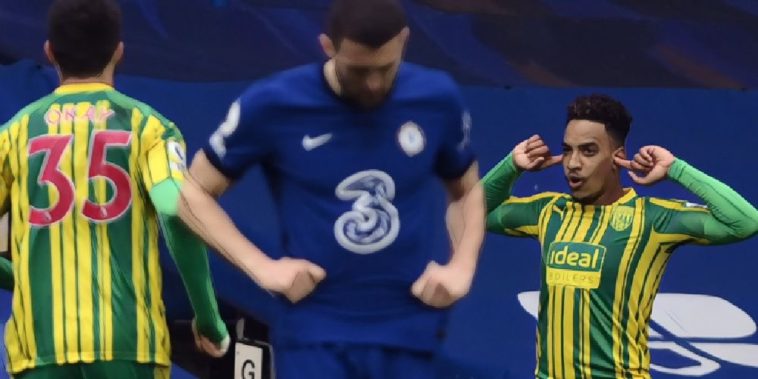 Chelsea’s long unbeaten run came crashing to an end as they slipped to a shock 5-2 loss to 19th placed West Bromwich Albion.

West Brom started brightly while Chelsea looked sloppy in the opening stages, though it would be the hosts who took the lead in the 27th minute as Christian Pulisic tucked home a rebound after Marcos Alonso saw his free-kick come back off the post.

Just two minutes later though and things started to unravel for Tuchel’s side as they were reduced to 10 men. Having been booked in just the fifth minute, the returning Thiago Silva’s somewhat reckless attempt to block an Okay Yokuslu effort caught the Turkish international and earned the veteran defender a second yellow card and an early bath.

As the game ticked into first-half stoppage time, the Premier League strugglers would haul themselves deservedly level, a long-ball from Sam Johnstone finding the run from deep of Matheus Pereira, the Brazilian catching the Blues defence as they pushed upfield, before lifting the bouncing ball over the top of Edouard Mendy.

Chelsea had only conceded two goals in the first 14 games of Tuchel’s tenure, but incredibly would let in two in two minutes as Pereira hit again before the interval, the Baggies winning the ball back high up the field before the 24-year-old cutely rolled it into the bottom corner from inside the area.

The Black Country club would find themselves in dreamland just after the hour mark, working the ball well down the right before Darnell Furlong got a cross in. The full-back cut it back into the path of Callum Robinson who expertly finished first-time past Mendy.

Big Sam’s side extended their lead with another tidy bit of play, this time a counter down the left, Mbaye Diagne being picked out by the impressive Pereira with the Senegalese making no mistake.

Chelsea pulled a goal back with 20 minutes to play through Mason Mount to give themselves a glimmer of hope, though they couldn’t further break down the resilient visitors.

In fact, West Brom would further extend their lead midway through stoppage time, some more tidy play seeing Pereira slip the ball into Robinson who timed his run in behind to perfection, before lifting it over Mendy to confirm a resounding 5-2 win, his goal the fifth of his Premier League career, with all of them coming against today’s opponents.

😅 All 5 goals have come against Chelsea pic.twitter.com/D6pm9EPc9l

The result means Chelsea could be leapfrogged by both West Ham and Tottenham this weekend, and speaking after the game, Thomas Tuchel suggested that the red card to Thiago Silva was a turning point.

“There was nothing so much until the red card came. After that we were unable to cope with the situation. I don’t know why,” he told BT Sport.

“We have to accept the big loss. It is a big wake up call for all of us, me included.

“We did big, big mistakes before the two yellow cards. We are responsible for that. There were too many easy ball losses. It was impossible for us to adapt to the situation. We have to accept it.

“Every shot was a goal from them. Clearly, it was not our day today. We will get the right response. First of all it’s important we digest it. I did not see it coming, now we have to take our responsibilities – me included – and shake it off.”

Next up for Chelsea is a trip to face FC Porto in the Champions League quarter-finals, before a trip to face Crystal Palace in the league next weekend.

Journeymen: The six players to have played for seven or more Premier League clubs