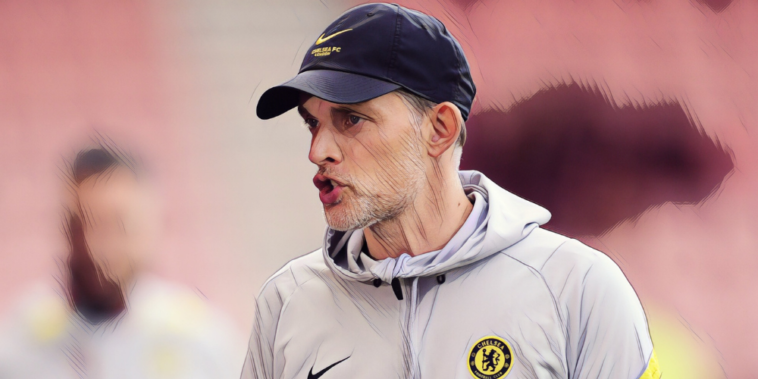 Thomas Tuchel insists Chelsea are still trying to ‘close the gap’ to Manchester City and Liverpool, despite their status as Premier League leaders.

The west London side are top of the Premier League and lead Liverpool and Manchester City in the title race at present, having enjoyed an excellent start to the campaign after last season’s Champions League success.

Despite their recent results and success, however, Tuchel believes his team are still looking to close the gap to the division’s best, admitting Liverpool and Man City have ‘set the standards’ in the Premier League in recent seasons.

“I’ve said many times Liverpool and Manchester City set the standards during the last four or five years, a fantastic effort what they did with the titles,” the said at his pre-match press conference.

“The title race was between the two of them, so it’s on us to challenge them. It’s on everyone else to join the race and I’m pretty sure there are a lot of teams out there who are hungry for points. So no [title] prediction from me.

“We’re trying to close the gap I have no problem in admitting there was a gap in the last years. They set a certain mentality with their managers together over the years and that’s what we try to close and this is what drives us.”

Chelsea travel to face Newcastle this weekend, with the Magpies currently winless following their first nine games of the campaign.

Optimism has surrounded St James’ Park since the announcement of the club’s takeover, however, a deal which has catapulted the North East side into the financial elite of world football.

Tuchel is expecting a tough test this weekend and says his side will need to be at their ‘best level’ to earn a result against a ‘very emotional and big club’.

“I cannot predict it but things have changed for them obviously and maybe changed in the dressing room, the spirit within the club and the belief in the city and their supporters.

What’s coming, maybe that effects the atmosphere in the stadium for them and of course for us but listen we’ve come up against matches when we’ve played as so called favourites.

“I liked a lot how we approached these matches with the kind of effort and intensity was a nice approach and exactly the approach we want from our team to prove the point during the ninety minutes.

“We expect a tough game it cannot be a surprise coming to a very emotional and big club, we need to be on our best level.”