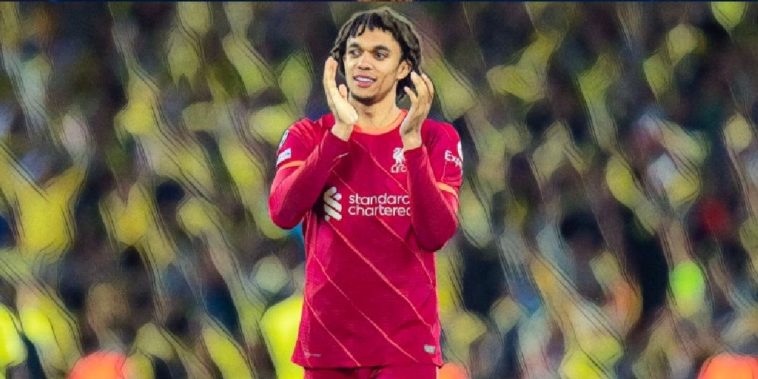 Trent Alexander-Arnold has said Liverpool can’t afford to be complacent in their Champions League semi-final second leg against Villarreal.

Liverpool earned a 2-0 win at Anfield last week to give themselves a huge opportunity to qualify for the Champions League final, a Pervis Estupinan own goal quickly being followed up by a Sadio Mane strike to give the Reds an advantage.

Speaking ahead of the second-leg at El Madrigal, influential Reds full-back Alexander-Arnold has urged his teammates to maintain their high standards and said ‘complacency cannot slip in’.

“We want to go there and win. We know we can’t be silly and get drawn into how they want to play but we want to make sure we get through,” he told the media.

“It’s a good lead but at the same time, it’s dangerous. Complacency cannot slip in. It’s been a excellent campaign so far. We’ve seen off a lot of big teams.

“We hope to bed them to bed and make it our third final appearance in five seasons.”

Progress from Tuesday’s semi-final will see Liverpool book their place in their third Champions League final in just five years.

In 2017/18, Liverpool won the first leg at Anfield against Roma 5-2, before being made to sweat in the Italian capital as they slipped to a 4-2 loss. The following year, the Reds were heavily beaten by Barcelona at the Nou Camp before they produced a stunning comeback at Anfield to progress to another final.

The roar when Sadio Mane slid the ball home 🔥

Alexander-Arnold – who infamously produced that corner against Barcelona three years ago – is hoping he and his side have an ‘easier’ task on Tuesday night after making it difficult for themselves in their previous outings.

“Looking at the other two semis, we’ve made it difficult for ourselves so hopefully it’s a bit easier tomorrow,” he said.

“But in the Champions League semis, the teams are the best in the world, so it’ll be difficult. I think when we set up and we go through the analysis, we’ll use that.”

Liverpool fans were delighted to hear the news of Jurgen Klopp’s two-year contract extension to keep him at the club until 2026, and Trent is hopeful that the German can continue to help deliver the levels of success that he has so far brought to Anfield.

“Hopefully those extra two years [of Klopp] are as successful,” he said.

“It’s an increase in success every year with him. This has been special so far. We can make it something special. Hopefully we’ve got four more years of that to come.

“It wasn’t like it was a big party when he heard. It’s hard for news to sink in when games come thick and fast.

“We’ll know when we sit down that it is good news but as a set of lads, we’re focused. He hasn’t spoken about it. Business as usual.”