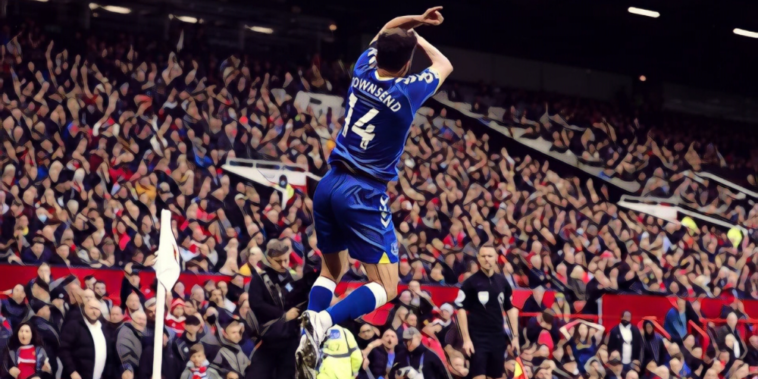 Andros Townsend continued his fine form with a second-half equaliser, as Everton came from behind to earn a deserved draw against Manchester United at Old Trafford on Saturday.

In a lively opening from the hosts, Anthony Martial squandered an excellent chance to head his side ahead inside five minutes, while fellow forward Edinson Cavani saw another headed effort well saved by England number one Jordan Pickford.

The away side improved as the half went on and looked a threat on the break, with Demarai Gray notably denied by David De Gea, while Abdoulaye Doucoure had a strike superbly blocked by Aaron Wan-Bissaka.

With the game edging towards half-time, the breakthrough eventually came for the hosts courtesy of Martial, the recalled forward latching onto Bruno Fernandes’ perfectly weighted pass and curling in past Pickford – the ‘keeper undone by a slight deflection off Yerry Mina.

After an even start to the second-half, the Toffees struck back through summer signing Townsend, the in-form winger rounding off a blistering counter-attack after excellent strength and speed down the left from Gray.

Solskjaer had introduced Cristiano Ronaldo and Jadon Sancho prior to that goal and the two combined to almost put the Red Devils back ahead with the Portuguese striker lashing just wide from the angle, while fellow substitute Paul Pogba curled a speculative effort over the bar.

With the game entering the closing stages, it looked as if Everton might have snatched a winner through Yerry Mina after a threaded pull back from Tom Davies, only for VAR to swiftly rule the goal out for a tight offside, with Davies perhaps ruing not taking the chance himself.

That proved to be the last moment of drama as Rafa Benitez’s side hung on for a well-earned point to continue their fine start to the season.

Speaking after the match, goalscorer Townsend revealed that his Ronaldo-esque celebration following the equalising goal was a ‘mark of respect’ to the Portuguese icon, rather than an attempt to rile up the 36-year-old.

“Not imitating, it’s just a mark of respect to a guy who influenced my career,” Townsend told BBC Radio 5 Live.

“I spent many hours on the training pitch and in the video room trying to analyse his free-kicks and his stepovers and the way he dedicated himself to football. So it wasn’t an imitation it was a mark of respect to one of my idols. I probably didn’t do the celebration justice and didn’t execute it properly.”

That strike also ensured a fifth goal in nine games in all competitions for the former Crystal Palace man since his arrival on Merseyside on a free transfer over the summer, albeit with the Englishman admitting that he is ‘capable of much more’.

“I’m loving my football and I’m so happy to have the opportunity to play for Everton football club and to contribute and score goals. I’ve said many times in the past I should e scoring goals on a more consistent basis. For one reason or another I’ve never really done it over the course of the season. It’s been a good start but I’m capable of much more.

With the international break to come next week, Everton are next in action at home to West Ham United on Sunday 17 October.