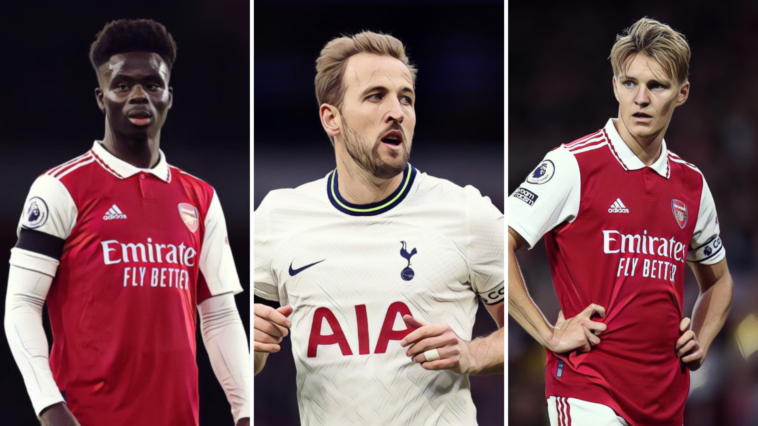 Tottenham and Arsenal will renew rivalries in the Premier League this weekend in a huge North London derby clash.

Arsenal will travel to the Tottenham Hotspur Stadium to face their fierce rivals as Premier League leaders, with Spurs intent on putting a dent in their title challenge and boosting their own hopes of Champions League football.

As ever, it promises to be a clash packed full of incident and ahead of the game we’ve compiled a combined XI from both squads.

Aaron Ramsdale edges out Hugo Lloris for a place in goal for our combined side, with the goalkeeper having gone from strength to strength at the Emirates.

Initially signed as competition for Bernd Leno, Ramsdale ousted the German last season and has not looked back. His distribution has been a feature of Arsenal’s development under Mikel Arteta, while he ranks second in the Premier League for clean sheets this season as the Gunners have shown an improved defensive chemistry.

The 24-year-old has featured in every minute of the club’s league campaign to date and will have his ambitions set on challenging Jordan Pickford for a more regular role with England.

Ben White has adjusted to the demands of Mikel Arteta this season, with a fine campaign in an unfamiliar right-back role. The introduction of William Saliba to the side has seen White shifted to full-back, where he has excelled with his defensive anticipation and progression of the ball.

Former Arsenal full-back Bacary Sagna recently lavished praise on the White and believes the 24-year-old has been one of the Premier League’s best defenders this season.

“He had been doing amazingly well for Arsenal this season,” Sagna said.

“He joined the club with a big price-tag, but he has proved he is one of the best defenders in the Premier League this season. He’s not a natural right-back, that isn’t his first position, but his performances have been class.”

Cristiano Romero has proven an inspired signing for Spurs, with the centre-back having emerged as one of the Premier League’s most commanding defenders.

A competitive central defender, Romero mixes an aggressive style off the ball with an elegance on it, distributing the ball efficiently from the backline. The 24-year-old returned to Spurs this winter as a World Cup winner, having featured in all seven games during Argentina’s run to success in Qatar.

His emergence has been a key reason for La Albiceleste’s recent successes in the Copa America, Finalissima and World Cup, with the defender set to be the defensive pillar on which Antonio Conte builds his Spurs side.

William Saliba is enjoying quite the debut season at Arsenal. The centre-back had to be patient for his chance with the Gunners after three consecutive loan spells, but has emerged as a cornerstone of the side this season.

Saliba has been a pivotal presence in the Arsenal side, boasting a blend of raw athleticism, defensive intelligence and composure. The France international’s class was demonstrated during the first North London derby meeting between the sides this season, as led his teammates for touches (77), successful passes (67), tackles (3), clearances (3) and recoveries (11).

He also failed to lose a single duel and will be key to stopping Harry Kane again this weekend. It is a match-up that could decide the contest.

Mikel Areta raided his former side for some familiar faces last summer, securing deals to bring Gabriel Jesus and Oleksandr Zinchenko to Arsenal from Manchester City.

Each had been overlooked cogs in City’s winning machine, but have become immediately integral to Arsenal’s improving team. Zinchenko has excelled at left-back, where his technical excellence has come to the fore.

He has followed similar instruction to those under Pep Guardiola, with a task to create a numerical advantage when stepping inside into midfield. A proven winner with four Premier League titles, he’s been a superb signing for Arsenal’s recruitment team.

Thomas Partey has stamped his authority on Arsenal’s season with a campaign full of dominant performances in midfield.

The fitness issues that had punctuated his time with the club have been forgotten, with Partey appearing a player transformed this season. His ball-winning, carrying and progressing have all shone through, with the Ghanaian the general and glue of the Gunners’ engine room.

His dominance in a defensive role has allowed Granit Xhaka to thrive further forward, in a double-act that has helped take Arsenal to a new level this season.

Rodrigo Bentancur breaks up the dominance of Arsenal in this XI, having been one of Spurs’ leading performers under Antonio Conte this season.

A shrewd signing for Spurs from Juventus last winter, he has brought a mix of elegance, industry and poise to the north London club’s midfield.

This season has been the best goalscoring campaign of his career to date, with Bentancur having developed a welcome habit of netting at crucial times, rescuing results against the likes of Sporting Lisbon, Bournemouth and Leeds.

The Uruguayan is a fine technician and has formed an encouraging midfield understanding with Pierre-Emile Hojbjerg in blend of bite and guile.

Martin Odegaard is getting better and better in an Arsenal shirt.

The club captain has found his home at the Emirates after failing to find status at Real Madrid and has been exceptional in his second full season. The Norwegian is the creative catalyst of Mikel Arteta’s side, revelling in half-spaces between the opposition midfield and backline.

Arsenal’s joint-leading scorer in the Premier League this season (7), he has four goals and three assists in his last six league games, demonstrating his improved killer instinct in the final third.

The highest of compliments for Martin Odegaard 🤩 pic.twitter.com/9hBjxng8bg

Odegaard’s development has been notable this season, but there remains a sense that his is a talent that has the potential to move up another level or two. A lovely footballer to watch when at his best.

It can be easy to forget that Bukayo Saka is still just 21.

Arsenal’s Player of the Season in each of the past two campaigns, there is an argument that the winger is already the Gunners’ most important player. A creative force in the side, his dangerous and direct brand of football has illuminated the Emirates since his emergence into the side.

Just a handful of players have ever been directly involved in more Premier League goals (45) before the age of 22 and Saka has until September to improve his numbers. While Robbie Fowler’s record (99) looks out of reach, the likes of Marcus Rashford (52), Cristiano Ronaldo (52), Raheem Sterling (54) and Ryan Giggs (55) could all be passed before the autumn.

No U21 player recorded more goals and assists than Bukayo Saka in Europe's top five leagues in 2022 🌟 pic.twitter.com/zXoIX7mMEI

No u21 player provided more goals and assists than Saka in Europe’s top five leagues in 2022.

Son Heung-min has endured a difficult campaign to date, but the term ‘class is permanent’ ensures the South Korean retains a place in this combined XI.

Gabriel Martinelli is in the midst of a career-best, and perhaps breakthrough, campaign but Son remains one of the Premier League’s finest talents when at his best. Last season he scored 23 league goals to win a share of the division’s Golden Boot, ranking alongside Mohamed Salah at the top of the goal charts.

Oh how we've missed this 💙 pic.twitter.com/VdFDVWOuqF

Explosive and exciting when at full throttle, his partnership with Harry Kane has been one of the Premier League’s great double-acts.

Harry Kane leads the line in our combined side, the greatest goalscorer in the history of the North London derby and a forward chasing down all-time records.

Kane has scored 14 goals in just 16 league appearances against Arsenal and another this weekend would see the 29-year-old write his name further into the history books.

The England captain has 15 goals in 18 league appearances this season and remains one of the very best centre-forwards in world football.