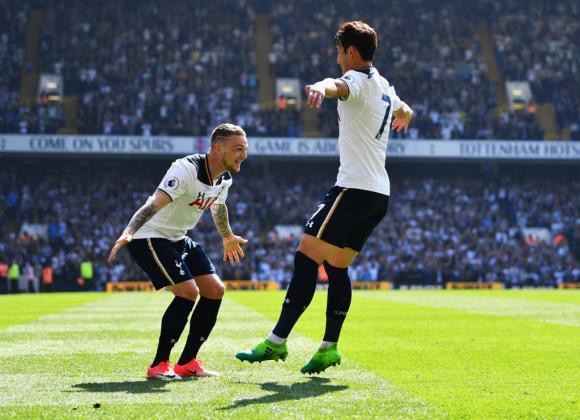 Mauricio Pochettino made three changes for Spurs with captain Hugo Lloris overcoming illness to start the game. Kieran Trippier and Vincent Janssen returned to the lineup at the expense of Kyle Walker and Moussa Sissoko. Talisman Harry Kane had to settle for a place on the bench after a month out with an ankle injury.

For Watford, Walter Mazzari made four changes, with captain Troy Deeney left on the bench. A lack of defensive cover meant Mariappa came into a back three with defenders Prodl injured and Britos suspended.

Surprisngly perhaps, it was Watford who started the brighter of the two sides. Spurs were struggling to get on the ball in the early stages with Clerverley and Doucoure doing well to minimise the space for creators Alli and Eriksen.

Despite this, it was Spurs who had the first chance of the game. Janssen did well to turn Mariappa and get his shot away, forcing Gomes into a comfortable save. Moments later, it was Janssen in the thick of the action again. Son’s cross from the left was deflected into the path of Janssen, and with the goal gaping, he could only knee the ball onto the bar. A huge opportunity missed for a man lacking confidence as it is.

Spurs finally made the pressure count, with a moment of true class from Alli. Picking the ball up 25 yards out on the left hand side, Alli curled his effort into the top right corner leaving Gomes with no chance. A sensational finish from a man with 16 Premier League goals this season, the same as Zlatan Ibrahimovic.

Moments later, Watford had a penalty appeal turned down. Janmaat felk too easily to the ground after a good one-two with Isaac Success.

It took Spurs just six minutes to double their advantage, with Eric Dier scoring his second goal in a week. Son’s cross was deflected out to Dier, who from about 20 yards thumped his shot past Gomes.

Once again, just minutes later, the game was beyond Watford’s reach. Son, this time turned finisher, curling in from 25 yards into the bottom corner after a quick counter attack. A ruthless attack from Spurs. As the half time whistle was blown, Watford must have been wishing it was full time.

Ten minutes into the second half, things were starting to get embarrassing for Watford. Trippier’s cross from the right was met on the volley by Son, placing the ball into the corner from eight yards. A brilliant cross from Tripper who now has 3 assists in 2017 despite starting just 5 games.

On 60 minutes, it was time for Kane’s much anticipated return. He replaced Dutch striker Vincent Janssen.

With 20 minutes to go, it was time for Watford’s talisman, with Deeney coming on for Amrabat, and he almost had an instant impact. A corner from the left found its way to Deeney in some space, but he could only poke his effort over the bar.

It didn’t take long for Kane to be in the thick of the action. After being played through behind the Watford defence, he squared for Son who remarkably fired wide. A huge chance for the hat-trick, the only negative to Son’s otherwise faultless performance.

As the match ended, it was Spurs’ 6th consecutive league win, and their 11th at home in the Premier League. A woeful performance from Watford who were not helped by a lack of available defenders.

Man of the Match: Kieran Trippier.