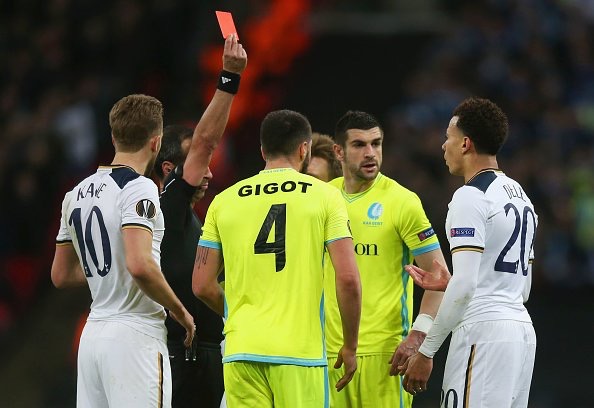 Spurs’ Wembley woes continued as ten man Tottenham went crashing out of the Europa League last 32 to Belgian side Gent.

Spurs arrived at Wembley knowing they had to score to overturn the 1-0 defecit in Belgium and this was reflected by Pochettino in his team selection.

Pochettino opted for the preferred 3-4-2-1 formation, boosted by the full fitness of centre back Jan Vertonghen. Harry Kane, Dele Alli, Mousa Dembele and Christian Eriksen all started the game in a full strength Tottenham line up.

For Gent, they also played their strongest line up for the trip to Wembley, with top scorer Coulibaly starting, despite being on the bench for the reverse fixture.

Spurs started in the best possible way, and got the early goal they so craved. Alderweireld knocked a long ball down the right, evading the Gent defence and Christian Eriksen cooly slotted under Kalinic in the Gent goal. A brilliant goal from Spurs, settling any early nerves about playing at Wembley.

Spurs started the game brilliantly, with Walker flourishing in the right wing back role, causing Gent left back Gershon all sorts of problems. Spurs were dominating so much that Jan Vertonghen fancied his chances at attacking, dribbling past a handful of Gent defenders in the box before seeing the ball deflected wide.

If Pep Guardiola was watching, perhaps he would have recorded it and shown it to John Stones. Despite this, Gent were soon level. Mitrovic did well to head a long corner into Lloris’ box where Harry Kane could only head into his own goal.

Spurs responded well to Gent’s equaliser and it was Walker again in the thick of the action. Beating the Gent fullback for what seemed the hundreth time, he rifled his shot towards the Gent goal which Kalinic did well to turn round for a corner.

Five minutes before half time and the game was swung in Gent’s favour. Feeling that he had been fouled moments earlier, Dele Alli went flying into a tackle, high and late catching Dejaegere’s shin. A disgusting tackle from Alli, who rightly received a red card.

If Alli is going to fulfil his potential as a world class player, his temprement needs to be kept in check by Pochettino. Having said this, it is Alli’s aggressive nature that makes him such a ruthless talent.

As the half ended, Pochettino would have been pleased by the way his side had played, but Alli’s moment of madness left Spurs in a difficult situation to say the least.

As the second half begun, Kane had a chance to redeem himself after his own goal. Eriksen slid a ball brilliantly through the Gent defence for Kane to only fire inches wide of Kalinic’s post. A huge chance for Spurs given the nature of the game.

Pochettino rolled the dice, bringing Heung Min Son on for Ben Davies, with the change almost making an instant impact. Son beat his man down the left and got the ball into the six yard area only to see it evaded past Kane. The ball came out to Eriksen who teed up Wanyama to fire Spurs a lifeline from 12 yards. A brilliant finish from a man not known for his attacking qualities.

Spurs were inevitably struggling to create clear cut chances having gone down to ten men, and were punsihed with ten minutes to go for Alli’s recklessness. A cross for Coulibaly from the left found its way to Perbet, the man who won the game for Gent in Belgium who struck the ball off Dier and into the corner of the net.

A poor goal for Spurs to concede from a defensive aspect, not helped by being a man light. The goal meant Spurs now needed two in ten minutes to go through to the next round which seemed bleak at best, and proved to be as much.

At full time, Spurs cannot be accused of not taking the competition seriously with Pochettino naming a full strength side at Wembley.

People will point to ‘The Wembley curse’ for Spurs’ loss which is somewhat naive given the impressive performance from Spurs’ players. With over 80,000 people at Wembley, incediently the highest ever attendance at a Europa League game, Alli has somewhat let them all down with his red card. On a positive note, getting 80,000 fans for a midweek last 32 Europa League game shows the size of Spurs, not many (if any) other teams could have managed similar. Gent into the hat for the last 16.