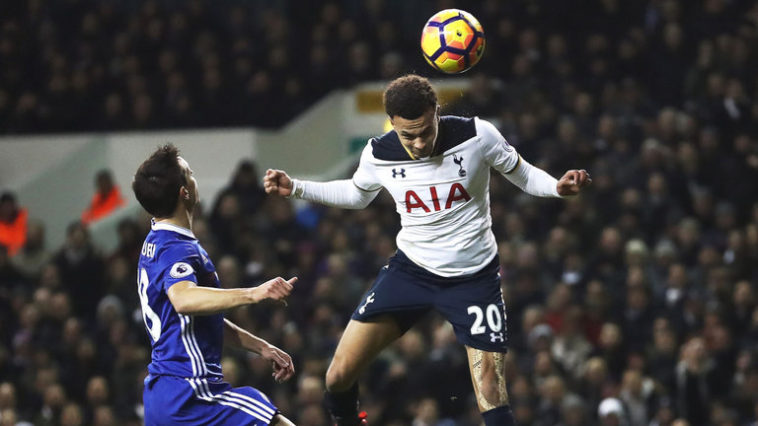 Spurs stuck with three at the back which worked so well in the 4-1 win against Watford, as Vertonghen, Walker and Dembele came back into the side for Wimmer, Trippier and Son. For Chelsea, Antonio Conte made two changes following Chelsea’s 13th consecutive victory against Stoke, with Matic and Pedro returning to the side at the expense of Fabregas and Willian.

For the majority of the opening stages it was a very tight affair with both sides cancelling each other out with similar formations. Having said that, it was Chelsea who had the first real chance of the game. Nemanja Matic swung a ball over the top of the Spurs defence to Eden Hazard only for the Belgian to drag his shot wide. A good chance for someone in the sort of form Hazard is in. It was Spurs who had the next real chance of the game. Mousa Dembele retreived the ball off Diego Costa and fed it to Eriksen who shot wide from 25 yards out. Such a tight affair with neither team really imposing themselves on the game for much of the first half.

Despite this, it was Spurs who took the lead on the stroke of half time. Christian Eriksen picked out Dele Alli with a pinpoint cross following good work from Walker down the right, and an emphatic header from Alli gave Spurs the lead, sparking wild celebrations from the home fans. As the half ended, the clinical nature of Spurs’ attack was the difference between the two teams in a pretty even opening 45.

Perhaps as expected, Chelsea started the second half on the front foot, and they really should have been level. Marcos Alonso’s header found its way to Hazard at the back post who headed wide from four yards. A huge chance to get Chelsea back into the game. Hazard’s miss was soon even more costly with Alli getting his second of the game. It was almost a carbon copy of the first goal, as Eriksen whipped in a teasing delivery to the back post, as Alli brilliantly planted his header into the corner of the net. Alli’s 10th Premier League goal of the season, already matching his tally for the whole of last season. Surprisingly perhaps, Spurs controlled the game from this point onwards. Dembele and Wanyama in particular dominated the midfield especially in the second half, as Kante and Matic failed to get a hold on the ball like they have done for much of the season.

As the game ended, so did Chelsea’s winning run as well as their chances of setting a new Premier League record of 14 straight wins. For much of the game it was an even affair, but two brilliant Eriksen crosses and clinical Alli headers seperated the London rivals. The win leaves Spurs third in the table, who might be feeling another title charge is by no means beyond them. Antonio Conte will be proud of his side’s run despite the loss, as Chelsea remain 5 points clear of second placed Liverpool.