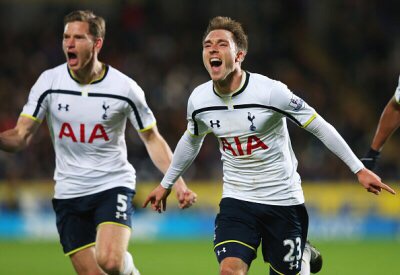 The transfer window is closed, and Tottenham were one of the biggest movers on deadline day, completing the last minute signing of Moussa Sissoko from Newcastle as well as Georges-Kevin N’Koudou from Marseille.

Now that their transfer dealings are on hold until January, Spurs are attempting to tie a trio of stars to White Hart Lane on new and improved long term deals.

Christian Erikson, Erik Lamela and Jan Vertoghen have all been earmarked for new deals at the club as they look to build on their third placed finish last season.

Danish playmaker Erikson is already close to agreeing a new deal at the club following Mauricio Pochettino’s intervention after talks had initially stalled.

Belgian defender Vertonghen is currently on £40,000-a-week and will be rewarded with a new long term deal that will see him become one of the club’s top earners whilst Argentine winger Erik Lamela will also be rewarded with an extension to his current £70,000-a-week deal, although with very little increase in his salary. Their current deals expire in 2018.

Tottenham were gifted a releatively kind Champions League draw earlier this month, where they will face CSKA Moscow, Bayer Leverkusen and AS Monaco in the group stages that get under way in just a few weeks time.