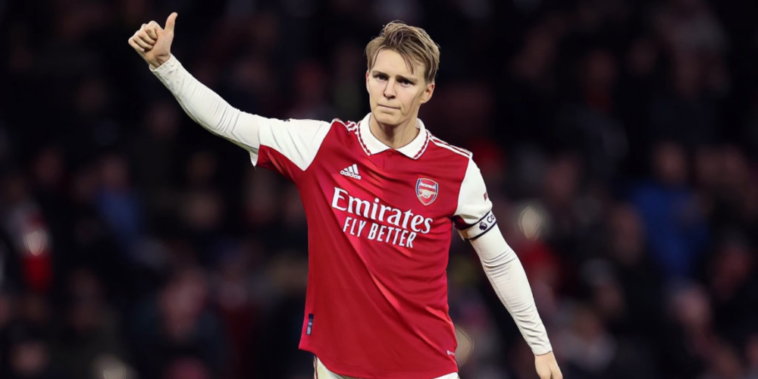 This season several midfielders have found their goalscoring groove, with Martin Odegaard continuing his recent purple patch for Arsenal with a goal in the club’s 2-0 win over Tottenham last weekend.

Following the Norwegian’s latest goal, we’ve decided to rank the highest-scoring midfielders in the Premier League so far this season.

Alexis Mac Allister is having some season at Brighton.

The midfielder has been a crucial part of a successful season so far for the Seagulls, who have taken the departure of Graham Potter in their stride to continue pushing up the table. Mac Allister has scored five goals in 16 league appearances for Brighton this season, already matching his total from the 2021/22 campaign.

THE ICING ON THE CAKE FROM MAC ALLISTER!! 🧁 pic.twitter.com/HAx2ArCnEC

His impressive performances at club level earned the 24-year-old a place in Argentina’s World Cup squad, where he started six games – including the final – as the South Americans were crowned world champions for a third time in Qatar.

Mac Allister’s role in that triumph has increased speculation surrounding his future, having become Brighton’s first ever World Cup winner. He received a hero’s welcome on his return to the Amex Stadium.

James Ward-Prowse moved to six league goals for the campaign after his double earned Southampton a 2-1 win at Everton last weekend.

The Saints have struggled this season and remain bottom of the Premier League table, but Ward-Prowse has one again provided a welcome contribution from midfield.

His winner at Everton came in familiar fashion as he bent home a brilliant set-piece, firing past Jordan Pickford for his 16th free-kick goal in the Premier League.

Most direct free-kicks scored in the Premier League since the start of the 2020/21 season:

The 28-year-old is now just two free-kicks behind David Beckham’s divisional record (18) and has scored seven goals in all competitions this season. He is more than capable of eclipsing his career-best total of 11 goals set last season.

Pascal Gross’ classification as a midfielder might cause some debate, such has been the versatility of the Brighton star.

Already this season Gross has featured in both full-back positions, as a false nine, and in multiple midfield roles, with the German having enjoyed some of the best football of his Premier League career in 2022/23.

Gross has been an inspired signing since his £3m arrival from Ingolstadt in 2017, proving an under-appreciated component of a Brighton side who have improved season after season. The 31-year-old has scored six goals and laid on a further three assists in 18 appearances this season, his best goalscoring campaign since his first season at Brighton.

It has been a vital contribution for a Brighton side who lack a reliable centre-forward, with Gross the club’s leading scorer in all competitions alongside Alexis Mac Allister and Leandro Trossard.

James Maddison’s importance to Leicester has perhaps best been demonstrated in his absence this season.

Last season the midfielder compiled the best individual campaign of his career with 18 goals and 11 assists in 53 appearances across all competitions, before beginning the current season in similarly impressive form – despite Leicester’s struggles – to make himself impossible to ignore with England.

One of the many reasons why James Maddison is heading to the #FIFAWorldCup with @England 🧨 pic.twitter.com/9JsLcfNZ0B

Gareth Southgate overlooked Maddison at the World Cup, despite his rate of production this season. He has seven goals and four assists in 11 league games and the Foxes have faltered without the 26-year-old since the season’s restart, losing four consecutive games.

Newcastle are understood to retain an interest in Maddison after a failed attempt to sign the midfielder last summer. He would be the calibre of signing that could take the club’s ambitious project up another level.

Martin Odegaard is the highest-scoring midfielder in the Premier League this season, after netting his eighth goal of the campaign during Arsenal’s North London derby win over Tottenham last weekend.

Odegaard is in the finest form of his career right now after growing into his role as Arsenal captain, with the Norwegian having been a vital presence in the club’s start to the season.

What a finish this is! 💥

The 24-year-old’s goal at Spurs was an example of his increasing confidence as Odegaard lashed in a fantastic finish form the edge of the area, his fifth goal in his last seven Premier League appearances.

Odegaard has already bettered his goal record from last season and has emerged as one of the players of the Premier League campaign for his control on the Arsenal midfield. The Gunners are top of the division and boast an eight-point advantage over Manchester City as the club chase a first Premier League title since 2003/04.