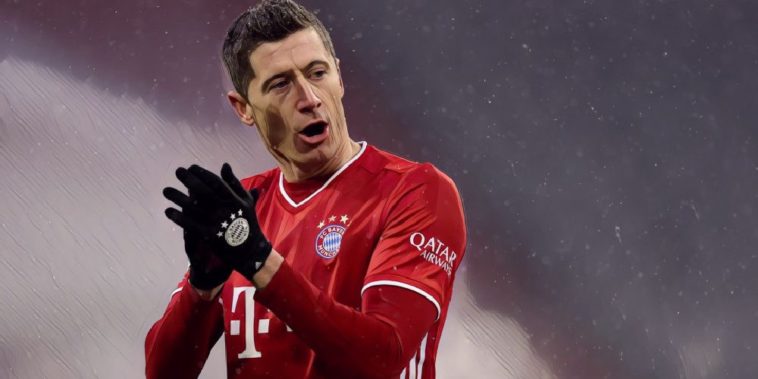 European football is currently blessed with some fantastic forwards and some of the game’s greatest names are enjoying excellent seasons in front of goal across the continent’s major leagues.

Here are the six leading scorers in Europe’s top five leagues in 2020/21:

Kylian Mbappe has finished as the leading scorer in Ligue 1 in each of the past two campaigns and is the current frontrunner to win the award once more, netting 16 goals in just 16 league starts for defending champions, Paris Saint-Germain.

Mbappe has emerged as the key figure in a PSG side which have dominated French football in recent seasons, though the Parisians find themselves third in this season’s title race and three points adrift of league leaders Lille.

The France international has now scored an incredible 80 goals in 96 league appearances for PSG and could become the first player since Jean-Pierre Papin in 1992 to finish as the top scorer in Ligue 1 for three successive seasons in 2020/21.

Mohamed Salah is the current leader in the race for the Premier League‘s Golden Boot award, having scored 16 league goal this season despite Liverpool’s stuttering title defence.

The Egyptian international scored a hat-trick on the season’s opening weekend and has remained prolific throughout the course of the campaign, with only two players having managed more goals across Europe’s major leagues this season.

Salah recently became the first Liverpool player since Ian Rush to score 20+ goals in all competitions in four consecutive campaigns, and will be seeking to win a third Golden Boot in just four seasons since arriving on Merseyside in 2017.

The 28-year-old would become just the third player in Premier League history to finish as the division’s leading scorer on more than two occasions, joining Thierry Henry and Alan Shearer.

Cristiano Ronaldo’s legendary status continues to be enhanced with his exploits at Juventus, the five-time Ballon d’Or winner remaining one of the world’s greatest goalscorers despite turning 36 earlier this month.

Ronaldo is the leading scorer in Serie A at present having netted 16 times in 17 league appearances, with the Portugal international in contention to become the first player in history to finish as the top-scoring player in England, Spain and Italy.

Ronaldo’s goals have helped keep Juventus in contention for a 10th consecutive title despite an indifferent start to Andrea Pirlo’s reign in Turin, the Bianconeri seven points adrift of league leaders Inter Milan with a game in hand.

The defending champions will hope Ronaldo can maintain his red-hot form throughout the second half of the season with a fifth European Golden Shoe and maiden Capocannoniere award within his sights.

Barcelona’s hierarchy made the decision to allow Luis Suarez to leave the club last summer, sanctioning the sale of the Catalan’s third-highest ever goalscorer to divisional rivals Atletico Madrid as the club headed in a new direction under Ronald Koeman.

That decision has come back to haunt Barcelona this season with Suarez having been the inspiration behind Atletico’s title charge, scoring 16 league goals for the league leaders who have opened up a five-point advantage with two games in hand.

16 – Luis Suárez 🇺🇾 has scored 16 goals in his first 17 games for Atlético de Madrid in LaLiga, becoming the fastest player to reach 16 goals for the same club in the competition in the 21st century (Cristiano Ronaldo 🇵🇹 – 15 goals for Real Madrid in 2009/10). Amazing. pic.twitter.com/wHbLRFdA7P

The Uruguayan may have turned 34-years-old last year but he remains one of the best in the division, adding a new dimension to Diego Simeone’s side and leading the race to win the Pichichi Trophy as Spain’s top scorer.

Andre Silva had struggled to settle since leaving Porto as a highly-rated prospect three years ago, failing to make an impact at AC Milan before an underwhelming loan spell at Sevilla.

He signed for Eintracht Frankfurt on loan last season and impressed to earn a permanent move to the Bundesliga, his performances reaching new levels during the 2020/21 campaign to fire the German’s pursuit of Champions League football.

Silva has scored 17 goals in just 19 league appearances for Frankfurt who currently sit fourth, with just six points currently separating the teams from third to seventh in a fascinating race to secure a top four finish.

The 25-year-old’s confidence has returned and he will hope his form can earn him the position of leading the line for holders Portugal at this summer’s European Championships, having netted 16 goals in 37 appearances at international level to date.

The best number nine in world football continues to get better and better with Robert Lewandowski enjoying another sensational campaign at Bayern Munich.

Lewandowski scored 55 goals in all competitions last season to inspire the Bavarians to a historic treble-winning campaign, being named as the planet’s finest footballer by winning ‘The Best’ FIFA Men’s Player award in 2020.

The 32-year-old has begun the 2020/21 campaign in spectacular style and has scored an astonishing 24 league goals in just 18 starts this season, Lewandowski now just eight goals short of becoming the second-highest scorer in Bundesliga history.

The most goals ever scored in a Bundesliga season was Gerd Muller's 4️⃣0️⃣ in 1971-72.

With 14 games to play, Robert Lewandowski has 2️⃣4️⃣ 🔥

Will he do it? 👀 pic.twitter.com/w3Jj9vZlVS

The Poland international looks set to finish as the league’s leading scorer for a sixth time in his career, whilst his incredible goal record could see him land a first-ever European Golden Shoe this season.

See also – The longest winning runs in English domestic football: From the 19th century to the present day