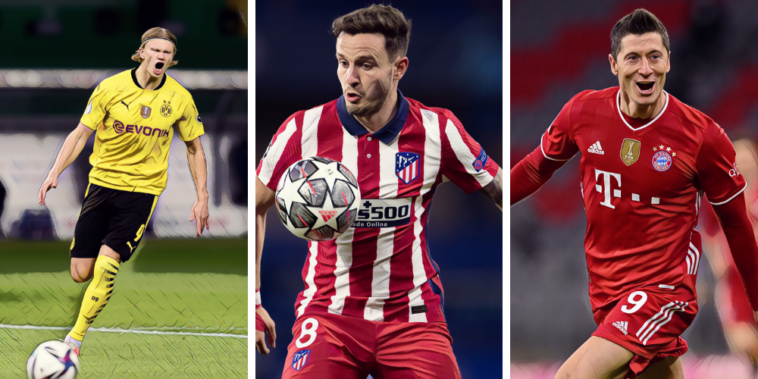 The summer transfer window always offers a sense of intrigue as exciting new additions arrive in the Premier League, with Jadon Sancho’s long-awaited move from Borussia Dortmund to Manchester United this summer’s headline signing so far.

There remains plenty of time for further high-profile additions with more than a month until the window slams shut and a host of leading names continue to be linked with the Premier League as the rumour mill hits overdrive.

We’ve picked out five of the best names to have regularly been circled amongst the speculation, here are five top players we hope move to the Premier League this summer.

Robert Lewandowski’s status at Bayern Munich should be untouchable given his exploits in recent seasons, but there has been continued speculation this summer over a potential parting of ways between the forward and Bundesliga champions.

The 32-year-old has two years remaining on his current contract and has been linked with almost every major club with money during the window so far, with both club and player facing a major decision to make.

Lewandowski scored an astonishing 41 goals in just 29 league appearances last season, breaking Gerd Muller’s all-time record for most goals in a single Bundesliga campaign to be named as Germany’s Footballer of the Year for a second successive season.

His overall record now stands at 203 goals in 219 league appearances since swapping Borussia Dortmund for Bayern, the kind of productivity that will prove impossible to replace should he leave Bavaria.

Robert Lewandowski is the first player to be named Footballer of the Year in Germany in back-to-back seasons since Michael Ballack in 2003.

Manchester City have been linked with the forward as a potential alternative to Harry Kane with Pep Guardiola having previously worked alongside the Poland captain in Munich, whilst Chelsea are long-term admirers and seeking centre-forward additions of their own.

It appears unlikely that Bayern would be willing to part with a player current enjoying the best football of his career, but if Lewandowski decides on a new challenge after winning everything there is to win in Germany, let’s hope the Premier League is his destination of choice.

Saul Niguez is expected to leave Atletico Madrid this summer with a host of Europe’s top clubs reportedly interested in his services, both Manchester United and Liverpool believed to have joined Barcelona in monitoring his situation.

Saul came through the academy system at Atletico and has been an integral part of their success in recent seasons, winning two Europa League titles and forming part of the side crowned La Liga champions last term.

The 26-year-old has grown frustrated with his role under Diego Simeone of late however, becoming a victim of his own versatility after featuring in wide and defensive positions in addition to his preferred central midfield role.

That multi-functional ability is sure to appeal to Premier League managers seeking midfield reinforcements, with Liverpool considering replacements for the departed Georginio Wijnaldum.

Saul could provide competition for places and left-footed balance to the Reds’ preferred midfield three, whilst Manchester United could also make a move amid uncertainty surrounding Paul Pogba’s future.

Recent speculation has suggested a fee in the region of £45m would be enough to prise the midfielder from the Wanda Metropolitano, a more than reasonable sum for a player with Saul’s quality and experience.

English football has been home to some brilliant Spanish midfielders since the turn of the century and Saul could be the latest to exhibit his technical talents in the Premier League.

Arguably the hottest property in world football right now alongside Kylian Mbappe, barely a day passes without speculation surrounding Erling Haaland and his next move.

Haaland’s explosion onto the European scene has been nothing short of sensational with the forward scoring 57 goals in just 59 appearances for Borussia Dortmund, following an initial exciting emergence at Red Bull Salzburg.

Each of Europe’s major clubs are interested in signing the 21-year-old, though Dortmund have insisted the Norwegian is not for sale this summer – despite the presence of a €75m release clause that will become active in 2022.

Dortmund are able to demand whatever fee they like for Haaland this summer, but have continued to insist they are planning for next season with the forward amongst their ranks, having sanctioned the sale of Jadon Sancho to Manchester United.

Chelsea have continually been linked with making a move during the current window as Thomas Tuchel looks to get ahead of the competition and strengthen his forward line, with Haaland the type of statement signing who could transform the west Londoners into genuine title challengers.

Manchester City are also in the market for a centre-forward following the departure of Sergio Aguero, whilst Liverpool’s first-choice front three are all heading towards their 30s with fresh impetus needed – though it appears the Reds are not in a financial position to secure Haaland this summer.

There also remains the links between the in-demand star and former Molde manager Ole Gunnar Solskjaer, Haaland’s future a story that is set to continue dominating the headlines in the coming months.

Another summer transfer window, another period of constant rumours linking Kalidou Koulibaly with a move to the Premier League.

Koulibaly has seemed set for a move to English football for what seems an eternity, with each of the Premier League’s biggest clubs having been previously linked with the Senegal international at some stage in recent windows.

Whilst the rumours are not as intense or widespread as they have perhaps been in recent years, there has been speculation that Rafael Benitez could seek a reunion with the Napoli defender following his appointment at Everton.

Koulibaly has been regarded as one of Europe’s leading centre-backs during his seven seasons in Naples, but an exit now appears closer than ever before with Napoli manager Luciano Spalletti admitting that the defender is reluctantly available for transfer this summer.

Having turned 30 during the summer and with just two years remaining on his contract, Napoli could now cash in on a prized possession they have fought tooth and nail to keep hold of in recent years.

Everton’s recruitment so far has been modest, but the arrival of Koulibaly on Merseyside would be a statement and provide an instant upgrade on their current options at centre-back.

Barcelona’s dire financial situation has led to the Spanish side offering out unwanted assets, with names such as Philippe Coutinho, Samuel Umtiti and Miralem Pjanic all linked with moves to the Premier League.

Perhaps the most notable name who could leave the Camp Nou this summer is Antoine Griezmann, who has largely performed below expectations since a €120m move from Atletico Madrid in 2019.

Griezmann has scored a respectable 35 goals in 99 appearances for Barcelona, though has struggled to find his role amid the presence of Lionel Messi and is a player capable of producing much more.

The France international’s exorbitant wages – in addition to the signings of Memphis Depay and Sergio Aguero – mean Barcelona are prepared to cut their losses on the 30-year-old, though talks over a potential return to Atletico have failed to materialise in a deal.

Chelsea, Manchester City and Tottenham have all been linked with signing the World Cup winner, who would improve the forward options of any of the Premier League’s leading sides.

Griezmann’s age and price-tag may prevent a big-money move to England, but the prospect of the forward signing on loan for a Premier League side should not be ruled out as Barcelona desperately seek to reduce their inflated wage bill.

Recent reports have also suggested there is a possibility Griezmann could agree to a salary cut in order to remain at the Camp Nou.