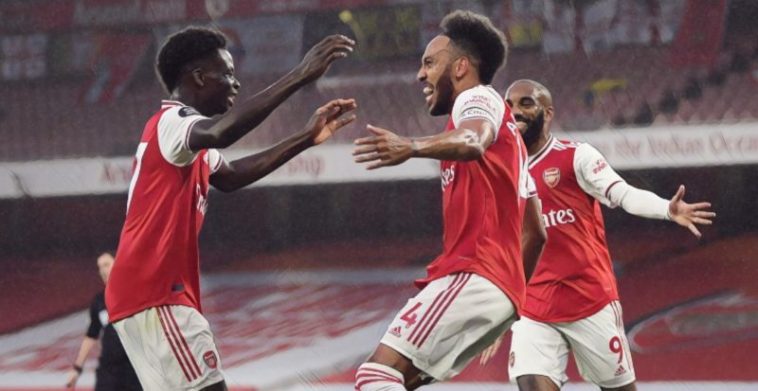 Kieran Tierney has hailed Arsenal’s ‘determination’ after the club secured a 1-1 draw with Leicester despite seeing substitute Eddie Nketiah sent off.

Arsenal looked set to secure a fifth consecutive victory in all competitions after taking the lead through Pierre-Emerick Aubameyang’s 20th Premier League goal of the season, the Gabon international turning home Bakayo Saka’s excellent pass to boost his hopes of securing a second successive Golden Boot.

Mikel Arteta’s side created the better chances and were thwarted on several occasions by Kasper Schmeichel in the visitor’s goal, though the momentum swung in Leicester’s favour following the dismissal of Nketiah with 15 minutes remaining.

The young forward was sent off just four minutes after coming on for a high challenge on James Justin, and the visiting Foxes made their advantage count as Jamie Vardy equalised with just six minutes remaining.

The draw continues the Gunners’ unbeaten run and leaves the north London side seventh in the Premier League, with Tierney praising his side’s ability to ‘dig in’ and secure a result after being reduced to 10 men.

“It was very tough, against a team who are good at keeping the ball. But we did well and dig in. We conceded a goal but we did well. It is focus and determination,” Tiernay told Sky Sports.

“It gives us confidence to keep the run going and stay unbeaten. We wanted to win but so long as we don’t get beat.

Tierney continued his own impressive form since the Premier League’s restart with another assured defensive display, and the Scotland international admits he is feeling ‘more settled’ in the capital following his move from Celtic last summer.

“I feel since the break I have come back better. I feel more settled in London. The break had done me wonders and I am grateful for every opportunity I get.”

Tierney also gave his view on the game’s turning point as Nketiah was given his marching orders by referee Chris Kavanagh, defending the 21-year-old and suggesting there was no malice behind the forward’s rash challenge.

“I had a view (of Eddie Nketiah’s foul). For me he is not the kind of player who would do that.”