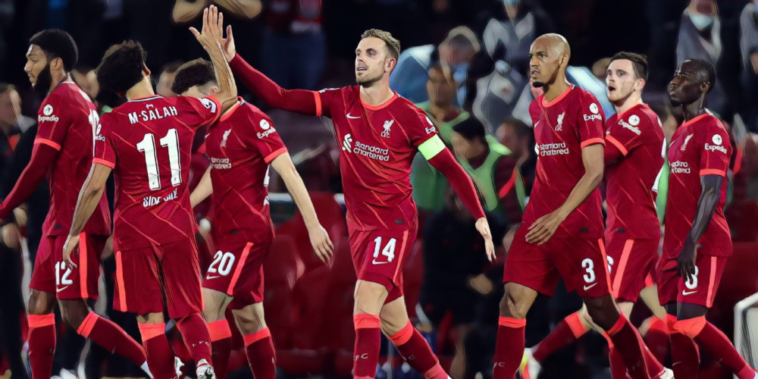 Liverpool’s 2-1 win over AC Milan at the San Siro back in December saw them achieve the best ever Champions League group stage performance by an English club, having maintained a remarkable perfect record with six wins from six in the competition.

The six-time European champions had already qualified for the knockout stages with two games to spare, yet their win in Milan saw them join an elite group of clubs to have navigated through the group stage while maintaining a 100% record.

Not only is the feat itself impressive, but the fact they achieved it in a so-called ‘Group of Death’ has only further served to emphasise their brilliance, the Anfield outfit finishing a staggering 11 points clear of second-placed Atletico Madrid.

Let’s take a look how it all unfolded for the Reds in their sensational group stage run:

That aforementioned ‘Group of Death’ would have been looking particularly deadly for Jurgen Klopp’s side at half-time on matchday one, the Premier League outfit finding themselves 2-1 down at home to AC Milan.

Former Chelsea defender Fikyao Tomori had gifted the hosts an opener inside nine minutes with an unfortunate own goal, before Mohamed Salah was then handed the chance to extend that lead soon after from the penalty spot, following Ismael Bennacer’s handball.

Relive our thrilling 3-2 victory over AC Milan from a different perspective in the latest Inside Anfield 😍 pic.twitter.com/rWJqPd9Iqs

The Egypt international has been almost faultless so far this season, but saw his spot-kick attempt well saved by the impressive Mike Maignan, with that miss looking like proving costly as goals from Ante Rebic and Brahim Diaz on the stroke of half-time flipped the tie on its head.

Those efforts had come against the run of play, in truth, with a dominant Liverpool bouncing back swiftly after the break to draw level, talisman Salah atoning for his earlier error with a well-taken finish from an exquisite Divock Origi assist.

In search of a winner, up stepped Jordan Henderson with a vitally important captain’s contribution, the England international ending his seven-year drought in the competition in style with a stunning half-volley into the bottom corner.

Heading into matchday two, Liverpool were the heavy favourites having dispatched Porto in style in previous years, scoring nine goals across their past two visits to the Portuguese side after 5-0 and 4-1 wins at the Estadio do Dragao in 2017/18 and 2018/19.

Klopp had downplayed those previous results ahead of his side’s return to Porto, although history repeated itself as the Reds again ran riot on Portuguese soil, taking an early lead as the irrepressible Salah turned in a rebound following a tame parry from ‘keeper Diogo Costa.

That would be the start of a dreadful evening for the opposition stopper as he was again at fault for the away side’s second goal, failing to deal with a fairly innocuous ball into the box which allowed Sadio Mane the easiest of tasks to tap home at the back post.

Leading 2-0 at the break, Klopp’s men soon made it three after half-time as Salah calmly netted his second of the night, before a brilliant Mehdi Taremi header sparked hope of an improbable late comeback.

Those hopes were dashed, however, as another Costa mistake allowed Roberto Firmino to score, the goalkeeper left stranded in No Man’s Land as the Brazilian passed in from distance before the forward capitalised on some abject defending to add his side’s fifth late on.

Despite eventually securing six wins from six, it hasn’t all been smooth sailing for the Merseysiders in the competition, the Reds having to weather a storm on an action-packed night in Madrid on matchday three.

The visitors had made the perfect start to proceedings against the La Liga champions, racing into a two-goal lead through a solo Salah effort and a wonderful Naby Keita volley inside just 13 minutes.

That lead was then reduced, however, as Antoine Griezmann poked in Koke’s long-range effort, with the Frenchman then squandering a one-on-one chance on the counter as Atletico came out fighting in a breathless first-half.

The World Cup winner atoned for that miss just after the half-hour mark with a well-taken finish into the bottom corner, the equaliser setting up a tense second period in which the drama continued right until the death.

Much to the disbelief of Diego Simeone, two-goal hero Griezmann was then dismissed for a high foot on Firmino, before the hosts then shot themselves in the foot again as Mario Hermoso clumsily brought down Diogo Jota inside the area.

Salah duly stepped up to restore Liverpool’s lead, although that was not the end of the entertainment as Simeone’s side were then denied a penalty late on, the referee controversially opting to reverse his initial decision to award the spot-kick after consulting the pitchside monitor.

It was a far less eventful encounter when the two sides met again just a few weeks later at Anfield, as Liverpool secured their place in the last-16 with a relatively comfortable 2-0 victory.

Much like in the Spanish capital, Klopp’s side took little time to get off the mark, powering to a two-goal lead inside the opening 21 minutes through Diogo Jota and Sadio Mane, with both men teed up by the ever-impressive Trent Alexander-Arnold.

Any danger of another Atletico fightback was extinguished ten minutes before the break as centre-back Felipe was handed his marching orders for a foul on Mane, with Atletico’s misery later compounded as former Red, Luis Suarez, saw an effort ruled out for offside.

The victory was all the sweeter as it came against pantomime villain Suarez – who was routinely booed by a crowd that had once adored him – while it also served as an act of revenge as Simeone’s men had previously dumped them out of the competition on Merseyside back in March 2020.

With passage to the knockout stages already secured, Klopp was afforded the chance to shuffle his pack for the visit of Porto in the penultimate group game, the German handing 19-year-old Tyler Morton the full 90 minutes on his first Champions League start.

In truth, it wasn’t a vintage display from the hosts and they were fortunate to not find themselves a goal down inside 11 minutes, as Otavio inexplicably fired wide with the goal at his mercy.

Despite not playing at their best, Liverpool eventually made the breakthrough just after the break, Thiago Alcantara firing in an outrageous, skimming strike into the bottom corner from just outside the box.

Salah then made sure of the points late on with a typically lethal finish into the bottom corner, although the damage could have been even worse for the visitors had both Mane and Takumi Minamino not seen efforts disallowed for offside.

It may have been something of a dead-rubber for Liverpool, although they went into their meeting with AC Milan in the final group game knowing that they could still have a bearing on how the group would pan out below them, with just a point separating the three sides below.

Losses in their first three group games had seemingly ended any hopes of progression for the Serie A side, although a win and a draw from their previous two fixtures ensured that victory in the San Siro could well send them through, if results were to go their way elsewhere.

Milan looked on course to get that much-needed victory as Tomori – who netted an own-goal on matchday one – fired in from close range just under the hour mark, but the much-changed visitors struck back through Salah just minutes later.

That goal was the 20th of the campaign for Salah in all competitions, with the 29-year-old the first Liverpool player since Ian Rush to hit that target in five successive seasons. He also netted his seventh Champions League goal of 2021/22, setting a new club record for a player in the group stage of a European competition.

Divock Origi then scored another vital goal just after the break to complete his side’s comeback, the result maintaining their 100% record and also condemning Milan to last place in the group.