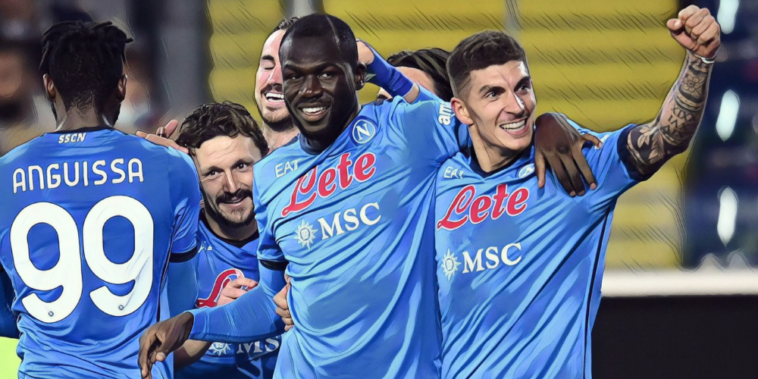 We’re approaching the half-way point in the European season and as the continent’s leading leagues prepare for the winter break, we’ve decided to assess the title races – or lack of – in Europe’s top five leagues.

After shock title success in France and Spain last season, there is a rather more familiar feel about this season’s league standings at present with the dominant forces once again reigning supreme.

Here is the state of play in the title races of Europe’s top five leagues.

The Premier League has proven fascinating viewing across the opening months of the campaign, with the form of the division’s leading sides opening up the prospect of a three-horse race for the title.

Manchester City, Liverpool and Chelsea have moved clear of the chasing pack at present, with each boasting a strong argument to be crowned champions at the end of the campaign.

Pep Guardiola’s side remain the team to beat and defending champions City have hit a fine run of form, moving three points clear of Liverpool last weekend after recording an eighth consecutive league win at Newcastle.

Top of the Premier League coming up to Christmas:

City’s lack of a centre-forward had been suggested as a hindrance to their chances of a fourth title in just five campaigns, but Guardiola’s side are experienced, talented and in control of the race.

Liverpool have bounced back from last season’s testing campaign and are the league’s leading scorers, with Mohamed Salah having been in scintillating form to lead the division for both goals and assists.

Salah’s departure next month – alongside Sadio Mane and Naby Keita – to the Africa Cup of Nations could prove problematic, however, and both City and Chelsea boast deeper resources than the 2019/20 champions.

Chelsea have fallen six points adrift of the summit after an indifferent run of form in recent weeks and face Liverpool (H) and City (A) in successive league fixtures early next month. Arsenal are currently fourth in the Premier League (32 points) but someway adrift of the league leaders.

Karim Benzema has been in inspired form for Carlo Ancelotti’s side, leading the division for goals scored (13) and ranking second for assists (7), whilst Vinicius Junior has provided fine support with the Brazilian enjoying a real breakthrough season at the Bernabeu.

Sevilla are second and six point adrift, though possess a game in hand on the league leaders. Real Betis and surprise package Rayo Vallecano – the latter led by the goals of Radamel Falcao – make up the remainder of the Champions League places.

Vallecano’s position in the top four has been a huge shock, with Andoni Iraola’s side having finished sixth in the second tier last season before promotion through the play-offs.

Defending champions Atletico Madrid are fifth and 13 points behind Real Madrid, but can move into the top four with victory in their game in hand. Barcelona are currently eighth and three points outside the top four at present.

Bayern Munich are currently powering towards a tenth Bundesliga title in succession, Germany’s top-flight having a familiar one-horse race feel as the Bavarians sit seven points clear of Borussia Dortmund in second.

Julian Nagelsmann’s side put daylight between themselves and Dortmund with a 3-2 win at the Westfalenstadion earlier this month, Robert Lewandowski scoring twice against his former side in a crucial win for the reigning champions.

Lewandowski has scored 19 goals in just 17 league appearances this season, having broken the Bundesliga’s all-time single season scoring record with 41 goals in 2020/21.

Dortmund remain in pursuit but have won just one of their past four to lose vital ground on Bayern, whilst SC Freiburg have enjoyed an excellent campaign to sit third at present.

The race for Champions League football looks set to be an exciting one in the Bundesliga, with just two points currently separating the sides placed between SC Freiburg in third and Union Berlin in seventh.

Serie A is shaping as the most competitive title race amongst Europe’s top five leagues this season, with just six points separating the top four sides in Italy as we enter the winter break.

Inter Milan lead the division after claiming a first league title in more than a decade last season, the Nerazzurri having hit fine form in recent weeks to win their last five fixtures at an aggregate score of 16-0.

1 – #Inter will close the first part of a #SerieA campaign first in the standings for the first time since 2009/10; in each of the last four seasons in which they finished the first 19 matches in first position, the Nerazzurri have always won the Scudetto. Ritual. pic.twitter.com/PNDuuaztT3

It’s six wins in a row for Inter whose winning run started with a 3-2 success against Napoli, the latter having began the season in blistering form to win their opening eight fixtures and 10 of their first 11.

Napoli have wobbled in recent weeks with just two wins from their past seven, but beat title rivals AC Milan 1-0 at the San Siro in their most recent encounter.

Milan are third and level on points with Napoli, whilst Atalanta are two further back as Gian Piero Gasperini’s side look to keep pace, having finished third in each of the past three Serie A seasons.

Jose Mourinho and Roma are fifth on 31 points and face a fight to close the gap on the top four, whilst Juventus – title winners in nine of the past 10 seasons – are seventh.

Normal service appears to have been resumed in France after Lille’s shock title success last season, with Paris Saint-Germain comfortably clear at the top in Ligue 1.

Mauricio Pochettino’s side have lost just one of their opening 18 games to establish a 13-point lead over nearest challengers Marseille, who even with a game in hand will remain some distance adrift of the runaway leaders.

The gap between PSG and Marseille is larger than the one currently between the second-place side and Reims in 14th, an indication of the dominance the Parisian side have enjoyed so far this season.

Rennes are third and in possession of the final Champions League spot, with Nice, Montpellier and Lens currently amongst the sides bidding to gatecrash Europe’s elite next season.

Lille have struggled to replicate last season’s achievements in a testing campaign and the champions are 11th, a huge 20 points behind PSG.