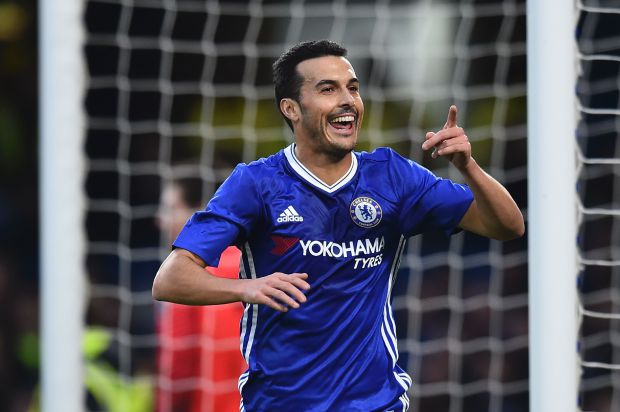 If Pedro and I were in a movie together, it would be Napoleon Dynamite. Wearing a “Vote for Pedro!” t-shirt. I would be dancing on stage to tell the world that he can play some good football.

After an uninspiring first season at Chelsea, the £19 million signing is now finally living up to his potential under Antonio Conte.

Pedro had many flashes of brilliance under Pep Guardiola at Barcelona, but the magic seemed to disappear prior to this season. To look at why he declined, and how he returned, we have to look at his playing time under different coaches at Barcelona and Chelsea.

Pedro made his debut for FC Barcelona on January 12, 2008, but didn’t have his breakthrough year until 2009–10. Under Guardiola, Pedro shone playing alongside Lionel Messi and David Villa.

Messi was amazing at pulling opponents out of position, especially when he dropped back into the midfield. This opened up the pitch for Pedro’s intelligent movement and clinical finishing to put points on the scoreboard.

During the Guardiola era, the 5ft 7″ winger played his best football off the focal point that was Messi. In 50 appearances during the 2010–11 season, Pedro scored 20 goals to help his club win La Liga and the UEFA Champions League.

In the 2010–11 Champions League final at Wembley Stadium, Messi checked his run, and Patrice Evra followed him. Using the outside of his foot, Xavi passed into the path of Pedro who ran into the unoccupied space in front of the box, putting the ball into the corner of the net past Edwin van der Sar.

Barcelona purchased Alexis Sanchez going into the 2011–12 season, and Pedro featured less in the starting XI. Guardiola left after the season, and the coaching changes ushered in a new system that involved wingers to build and play from further back. When Neymar and Luis Suarez joined Barcelona, there was no room for Pedro on the team.

On August 20, 2015, Pedro signed a four-year deal with Chelsea FC. He bagged a goal and a assist on his debut three days later against West Bromwich Albion, setting the bar high for his future in blue.

However, Pedro played under José Mourinho’ system that involved defending as a collective. Pedro, along with every other player in the squad, was asked to create chances through passing and dribbling from deep, none of which play to Pedro’s strengths.

Mourinho was eventually sacked, and Guus Hiddink steadied the ship as the season came to a disappointing close. Pedro finished with nine goals in 40 appearances.

Conte was hired as the new first-team coach for the 2016–17 season, bringing hope of resurrecting Chelsea like he did with Juventus after the Calciopoli scandal. Fans imagined how everyone would fit into the Italian manager’s system likened to a symphony with rehearsed and orchestrated strategies.

Chelsea started the season playing in a 4-3-3 formation, eerily similar to that of earlier managers. The reigning Chelsea Player of the Year Willian was favoured over Pedro on the right flank. The club started with two wins over West Ham United and Watford, both needing late goals from Diego Costa.

September proved to be pivotal month for Conte’s squad with losses to Liverpool and Arsenal. These defeats sparked a change in formation, switching to a 3-4-3. Pedro was slotted into the right wing alongside Eden Hazard and Diego Costa, an attacking trio that shared similar traits to Messi and Villa.

This shift in philosophy gave Pedro freedom to stay up the pitch, making it easier for Chelsea to transition from defence to attack. Hazard’s smooth dribbling draws defenders out of position, and Costa acts as a focal point to hold up play, allowing the 29-year-old to slip behind the back line. With the introduction of wingbacks to provide width, the attacking band can stay central to further influence the game.

In the match against Manchester United on October 23, 2016, Pedro scored just 30 seconds after the first whistle when he slipped past the napping duo of Chris Smalling and Daley Blind. Reminiscent of the Guardiola times, the former Barcelona player found his footing in the Chelsea squad.

After taking over the spot held by Willian, Pedro has scored 11 goals in 21 appearances. With focal points for him to work around, Pedro is finally playing in a spot that fits him perfectly.

It’s possible that Pedro could be replaced via the transfer market with a player like Sanchez or Antoine Griezmann. Pedro is already 29-years old, older than the average age of the squad by three years.

However, age is only a number that does not contribute to the three points being won each week. Pedro is finally being played in a position that highlights his strengths, and it shows in his form.

It’s crazy to think that not too long ago, Pedro didn’t fit in with Barcelona and Chelsea. He is a square peg that is finally not being shoved into a round hole. He has proved this season that he can score, and he still has tricks up his sleeves using his movement off the ball. Every time I watch Chelsea, there is one song playing through my mind.

If you are reading Pedro, I hope you don’t take this the wrong way. But as a former outcast Pedro, I just like the way you move (on the pitch).