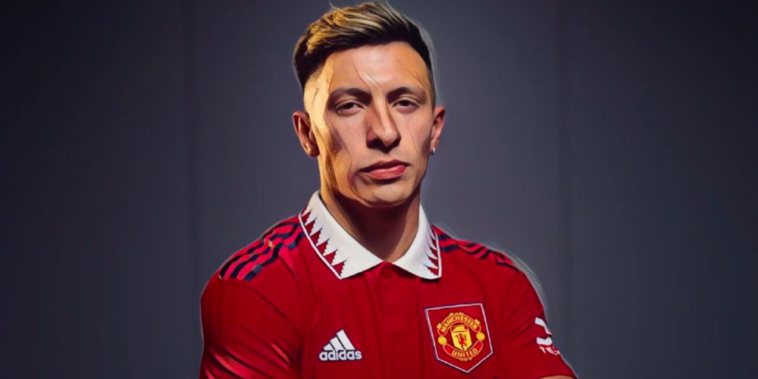 Manchester United have looked to South America for signings this summer, securing a deal for Lisandro Martinez as the club look to improve their defensive options.

The Argentina international joins in a big-money deal, having impressed under the management of Erik ten Hag at Ajax, where he was named as the club’s Player of the Season in 2021/22.

Martinez’s move makes him one of the most expensive defenders and Argentinians of all time and we’ve decided to rank the five highest transfer fees involving players from the nation.

Here are the five most expensive Argentinian footballers of all time.

The winger had arrived in a club-record deal from Real Madrid the previous summer, but failed to make a lasting impact and soon expressed his desire for an exit.

United recouped a sizeable fee of £44.3m for Di Maria, who enjoyed huge success after swapping the Premier League for Paris.

He made 295 appearances in all competitions for the Parisians before departing to join Juventus on a free transfer in 2022.

Mauro Icardi’s turbulent relationship with Inter Milan came to an end in 2019, with the forward – stripped of the captaincy under Luciano Spalletti before being left out of the squad following Antonio Conte’s arrival as manager – joining PSG on an initial loan deal.

Icardi had scored 111 league goals in 181 appearances for Inter, before making a strong start to his career with PSG. He scored 20 goals and added four assists in 31 appearances before the Ligue 1 season was curtailed due to the coronavirus pandemic.

The superb header from @MauroIcardi who nods in the winner 💪🔥#𝗣𝗦𝗚𝗢𝗟

The forward’s form persuaded PSG to exercise the option to sign Icardi on a permanent basis, securing a deal worth an initial £45m with a further £6.2m in potential add-ons.

Icardi has since struggled for regular first-team football at the Parc des Princes and has made just 21 league starts over the past two campaigns. He has scored 38 goals in 92 games for the club, but is believed to be free to leave the French capital this summer.

Martinez’s arrival in Manchester makes the defender the third-most expensive Argentine of all time, with the centre-back having completed a £55m transfer to Old Trafford.

Erik ten Hag was keen to bring his former player to the Premier League following three impressive seasons at Ajax, in which the 24-year-old won two Eredivisie titles and was named as the Dutch side’s Player of the Season in 2021/22.

An amazing feeling and a huge honour to join @ManUtd! 🔴

I'll do my very best as a Red to achieve together what this great club deserves… can't wait to get started! 👍🏼 #MUFC pic.twitter.com/YAe4vkOBjc

Aggressive with his defending and comfortable in possession, Martinez will bring a left-footed balance to the Red Devils’ centre-back options and has excelled with progressing the ball from deep.

Already well-versed in the manager’s methods, he has also featured at left-back and in midfield for Ajax with his versatility and adaptability a welcome asset.

David Moyes had been replaced with Louis van Gaal named as manager and the Dutchman set about revamping the Red Devils’ squad with the signing of the Argentine winger.

A British-record £59.7m fee brought Di Maria to the club from Real Madrid, with the marquee arrival having helped the Spanish giants to Champions League success the previous season.

Despite a promising start in England, the winger’s form rapidly declined as he became unsettled in the Premier League and after just a single season he was allowed to join PSG.

His negative comments on both the club and city have done little to improve his popularity since.

Gonzalo Higuain holds the record as the most expensive Argentinian footballer of all time, after joined Juventus in a £75.3m deal in 2016.

Higuain had scored 91 goals in 146 games across three seasons with Napoli, including a 36-goal campaign the previous season that equalled the Serie A single season record set by Gino Rossetti in 1928/29.

Napoli had finished as runners-up to Juventus the previous season and the club’s president called Higuain’s defection to their rivals a ‘betrayal’.

“Some people say that to speak of betrayal is exaggerated, but I think the opposite because there is the full sense of betrayal in this [Higuain] choice because of the ingratitude shown,” he told Corriere dello Sport, as per Sky Sports.

“Obviously I have to consider the role played by Juventus, but I expected a different kind of behaviour [from Higuain].”

Higuain scored 32 goals during his debut campaign with the Bianconeri and won three league titles during his time in Turin.

He fell out of favour following Cristiano Ronaldo’s arrival in 2018 and spent time on loan at AC Milan and Chelsea before leaving on a free transfer for Inter Miami. Higuain departed with a record of 66 goals in 149 appearances for the club.