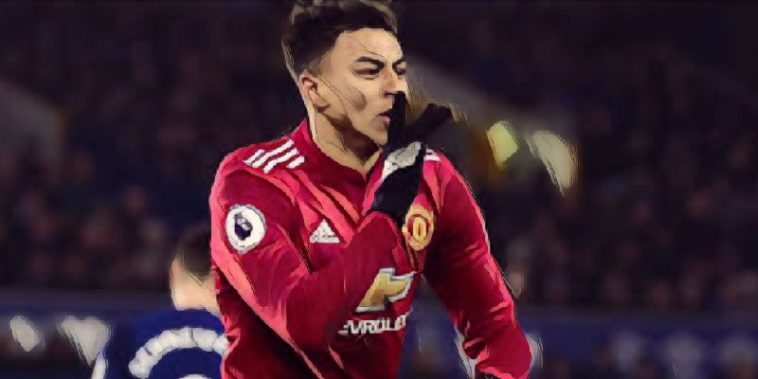 Jesse Lingard’s has had a remarkable rise to be a Manchester United star and that should be encouraging for other young players.

It’s fair to say Jesse Lingard has recently been in the best form of his career. The young English midfielder has managed eight goals in his last 10 appearances, each accompanied by a dance or an elaborate handshake of some sort, which have become a much-loved part of watching Lingard succeed. But it hasn’t always been plane sailing for the life-long red. Like many young players, Lingard has been through loans, rough patches and has received plenty of criticism, but his recent rise is a good sign for any young academy player.

Jesse Lingard first signed for Manchester United at the age of seven and began to work his way through the ranks, until he was finally included in a senior match day squad in 2011. However after failing to make any senior appearances throughout 2012 Lingard went on his first loan spell to Leicester City in the November of that same year. This loan move would last until the January of 2013 and involved Lingard getting a respectable 5 appearances under his belt, aged just 20. This was followed by other loan spells at a variety of different clubs: Birmingham City, Brighton and Hove Albion and Derby County, which lasted between 2013 and 2015 in total. Lingard managed an impressive four goals on his first appearance for Birmingham against Sheffield Wednesday in September 2013 and helped himself to two other goals during his four month long period at Birmingham. His other loan spells at Brighton and Derby saw him claim a further six goals.

Lingard made his return to Manchester at the start of the 2015/16 season. His first goal for the reds came against West Brom in November, in a 2-0 win at Old Trafford. Lingard continued to build on his goal scoring success, helping himself to four league goals in total that season, as United narrowly missed out on qualifying for the Champions League, finishing in 5th position. But the definitive moment of Lingard’s United career came when he scored the winning goal in the 2016 FA Cup Final. Not only did this help United to their first major trophy in the post-Sir Alex Ferguson era, but it also helped secure Lingard’s place in Mourinho’s United team the next season.

The midfielder wasted no time the following season, scoring the winning goal in the 2016 Community Shield against Leicester. Lingard went on to score another incredibly important goal that season, the second in the EFL Cup Final against Southampton, which United eventually went on to win 3-2. This led to Wembley being dubbed Lingard’s “lucky ground,” after his incredible ability to somehow score in cup finals there. His celebrations and handshakes with teammates also led to him being known as a keen dancer in the footballing world. Lingard received his first call-up to the England squad in 2015 (making a total of 8 appearances to date) and made his Champions League debut for the reds in 2015.

Alike many players in the Premier League Lingard has faced a copious amount of criticism. Some have argued that Lingard is quite simply not good enough for United’s first team and to be an England international, whilst others have criticised his prolific usage of social media. But his recent form has silenced such criticism and arguments.

Across all competitions this season Lingard has made 27 appearances in a United shirt and has scored 11 goals, including seven in the Premier League. Lingard scored twice as United beat long-time rivals Arsenal back in December and ensured United would snatch a point on Boxing Day, rescuing the reds by scoring both goals as United came from behind to draw 2-2 with Burnley.

Additionally his social media usage seems to be one of the things fans love the most about the 25-year-old. His Instagram and Snapchat have revealed behind the scenes photographs and videos of Lingard and his teammates, most recently videos of players feeding a tiger cub whilst on a visit to a zoo in Dubai and on other occasions has included videos of Lingard practicing his handshakes and his choreography. Fans seem to relish these sneak-peaks into the United player’s life and his consistent presence on the internet, which keeps them connected to him.

Lingard’s ability to overcome a series of loans, criticism and to make his dance moves and celebrations almost as well-known as he is is inspiring to any young player in any academy. This week United loaned out one academy graduate and are reportedly preparing to loan out another, but Lingard’s rise to the first team and recent form should serve as inspiration and a reminder that if they work hard their time will come at United.