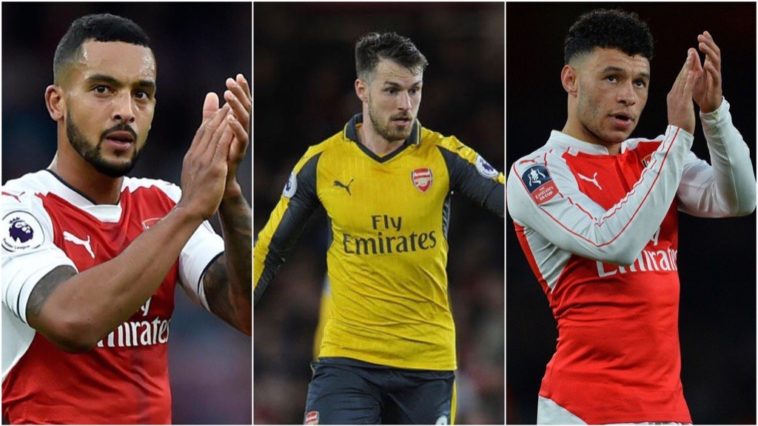 In December 2012, Carl Jenkinson, Aaron Ramsey, Jack Wilshere, Kieran Gibbs and Alex Oxlade-Chamberlain signed new contracts and committed their long-term futures to Arsenal. Fast forward five years and it would not be unreasonable to say that none of them have fulfilled their potential.

While Arsene Wenger argues that the British core is still integral to the club, there has not been much success to justify this belief. In fact, no member of the British core has started 30 Premier League matches in a single season since the contracts were signed.

This article will analyse each player since they signed the contracts in 2012.

Carl Jenkinson is a lifelong Arsenal fan and it’s obvious that he absolutely loves playing for the club. This much was clear to see when he scored his first Arsenal goal against Norwich in 2014. He celebrated like his life depended on it, clearly thrilled to score for the club he loves.

Jenkinson was on loan at West Ham for the 2014/15 and 2015/16 seasons. During his second spell with the Hammers, Jenkinson suffered a cruciate ligament injury which cut the loan move short. He made 52 Premier League appearances while at West Ham and gained invaluable experience but is still not a member of Arsenal’s first team.

Jenkinson has made just one Premier League appearance for Arsenal this season and with Hector Bellerin established as the first-choice right back, he has been unable to make an impact.

In March, he played 90 minutes for the under-23s against local rivals Tottenham Hotspur. Just 10 days later he featured for the under-23 side again and scored a last-gasp equaliser against Manchester City.

The problem is that Jenkinson started with the first team and now plays regularly for the under-23s suggesting that he has regressed rather than moved forward during his time at the club.

Jenkinson’s love for the club should be not be the only reason he remains at Arsenal when there are currently more talented individuals playing in his preferred position.

Aaron Ramsey has been extremely unlucky with injuries. The worst injury he has suffered at Arsenal was the broken leg following a tackle by Stoke defender Ryan Shawcross in 2010 which ruled him out for nine months.

There was a general feeling that Ramsey would not recover from the injury and it was not easy but in the 2013/14 season he proved that he was still a brilliant player. This was his best season at the club. The Welsh international scored 10 Premier League goals as well as the winner in the 2014 FA Cup final against Hull City.

Since then, Ramsey seems to have gone backwards. He has suffered more injuries since such as the hamstring injury against Liverpool in the first game of the season when Wenger admitted that he “pushed” him to be match fit after the Euros.

Ramsey was instrumental for Wales at Euro 2016 and was named in the UEFA Team of the Tournament. He missed the semi-final defeat against Portugal through suspension and the result could have been different had he been involved.

Ramsey seems to perform better for Wales than he does for Arsenal and if Santi Cazorla was not injured, he would probably have spent the majority of the season on the bench instead of on the pitch.

He had a brilliant game against Middlesbrough, providing the assist for Ozil’s goal but performances like this are all too rare when playing for Arsenal. Aaron Ramsey clearly has the talent but he needs to show it on a more consistent basis.

Jack Wilshere has been an Arsenal player since the age of nine. The main problem is how injury-prone he has become. Wilshere is constantly on the treatment table and missed almost the whole of last season when he broke his fibula during pre-season. He eventually returned in April and made a handful of appearances.

In an attempt to play more first-team football this season, Wilshere joined Bournemouth on loan. Despite failing to score, he has made 27 Premier League appearances with just five coming from the bench.

Unfortunately, but not unsurprisingly, Wilshere suffered yet another injury. In Bournemouth’s most recent game against Tottenham Hotspur, an accidental collision occurred with Harry Kane meant that Wilshere suffered a fractured left fibula and will miss the rest of the season.

Prior to the injury, Bournemouth had helped Wilshere get back to playing regular football, something he has not done for years at Arsenal.

Wilshere has always shown flashes of brilliance, both for England and Arsenal but his lengthy injuries have prevented him from excelling.

For someone that was supposed to be England’s next brightest hope (who isn’t) Wilshere has just 34 caps for his country since making his debut in August 2010 against Hungary.

Wilshere’s best season at Arsenal and the season he became a first-team regular was 2010/11. He only missed a couple of games with a slight back problem and made 35 Premier League appearances. During the 2013/14 season, Wilshere scored a sensational team goal against Norwich which won Match of the Day’s goal of the season.

It’s frustrating to watch a player constantly suffer injury setbacks. In my opinion, it would be best if Wilshere moved on from Arsenal instead of signing a new contract. He will be out for many months and when he returns he will be far down on the pecking order so a new start could be just what he needs.

Since the 2013/14 season, Kieran Gibbs’ appearances in the Premier League have steadily decreased. The left-back has made just six Premier League appearances this season. This is because Nacho Monreal, four years Gibbs’ senior, has been the club’s first choice left-back since joining Arsenal in 2013.

While Monreal’s influence has grown over the years, Gibbs has been limited to substitute appearances. Gibbs has spent the majority of the 2016/17 season on the bench, one day, 12 hours and 25 minutes to be precise.

The England international made his debut for Arsenal in 2007 and is another academy product. While still an important member of the squad, Gibbs is no longer an automatic starter and does not challenge Monreal enough for a place at left-back. At 27, Gibbs should be seriously considering his options if he has a desire to play more first-team football.

Alex Oxlade-Chamberlain is the youngest of the British core and there are rumours on a regular basis about him leaving Arsenal and going to other Premier League sides such as Manchester City or Liverpool.

Oxlade-Chamberlain has thrived in a central role this season and looks like he is finally beginning to fulfill his potential at the age of 23. He has been Arsenal’s best player for some time during this turbulent season and it is pleasing to see how he has developed.

He has made 26 Premier League appearances, the most in a single season since joining the club, and contributes with goals and assists. Oxlade-Chamberlain is the only player who could go on to big things but, if the newspapers are to be believed, that might not be at Arsenal.

While it would be a shame if he left the Gunners, it is clear that he would fit in with ease at another top Premier League club.

All of these Arsenal players have shown potential at some point but they have not been consistent enough. If Arsenal want to win the Premier League any time soon, they have got to have a major overhaul of their squad.

Players like Jack Wilshere and Aaron Ramsey who are injured on a regular basis or Carl Jenkinson and Kieran Gibbs who cannot establish a place in the first team should move on and play their football at a different club.

Alex Oxlade-Chamberlain is the only one of these five British players that Arsenal should make a massive effort to keep.

If you have something you want to say about Arsenal, join our writing team today and share your opinions.