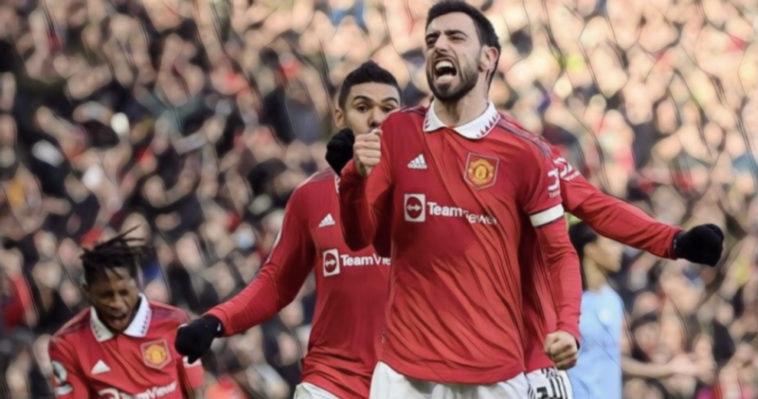 After a cagey opening period Manchester United would have the first sight of goal when their skipper Bruno Fernandes dragged a shot wide from a tight angle.

Erik Ten Hag’s tactical set-up of essentially man-marking Kevin de Bruyne with Fred seemed to be nullifying the Belgian and in turn Man City’s other attacking players. However, Erling Haaland did eventually get a sniff of goal on 23 minutes when he found himself free in the area 12 yards out, but Casemiro was on hand to block the Norweigan’s effort.

On 33 minutes United’s on-fire attacker Marcus Rashford got in behind the Man City defence and rounded ‘keeper Ederson but his tame effort was blocked on the line by Manuel Akanji.

Soon after Rashford once again found himself bearing down on goal from a Christian Eriksen pass, although this time Ederson got it right and got down well to snuff out the chance.

It became clear after the break that Pep Guardiola’s side was growing into the game; finding space and building pressure. Then on the hour mark when De Bruyne finally found himself in space he made United pay, the playmaker’s delightful clipped cross headed home by substitute Jack Grealish.

Man United were struggling to match the levels they reached during the opening period, but then out of nowhere, the Red Devils would equalise in the 78th minute. Rashford intelligently avoided making contact with a Casemiro through ball – as he was offside – and Fernandes raced onto it before confidently curling past the onrushing Ederson.

Then with the home crowd roaring them on United would completely turn the game on its head by taking the lead. A break down the left ended with lively teenager Alejandro Garnacho squaring the ball across the six-yard box and Rashford was on hand to fire home his seventh goal in his last seventh games.

Marcus Rashford so far this season:

Form of his life. 💥 pic.twitter.com/ABEEJEbusL

City pushed on in search of an equaliser but United defended manfully and stopped the visitors from creating any clear-cut chances and held on for the win.

Speaking afterwards United boss Ten Hag hailed the belief his side showed to comeback and secure a huge three points.

“The first half we played very well,” Ten Hag told BT Sport. ”We defended very well and broke in good opportunities. We were really happy at half-time.

“After half-time we had to sub Martial, he had some complaints, and the game changed. City came in, we were not proactive. They scored. The spirit of the team is so huge, the belief is there that the game is 90 minutes and we can fight back.

“I’m really happy with the performance of the team.”

“The belief is back and we’re in a good direction. You have to work out of possession [against teams like City]. They have qualities in split-moments to score goals. We saw that today. One mistake and they scored.”

United move up to third in the table after today’s win, with crucial away trips to Crystal Palace and Arsenal to come next week.