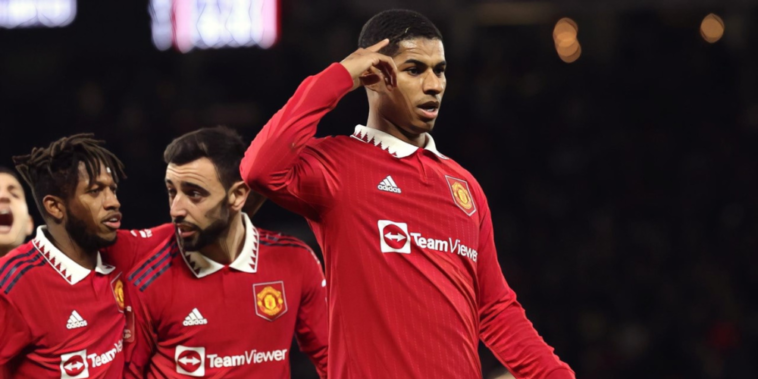 Is it just us or does the World Cup already seem a lifetime ago? It’s less than a month since Lionel Messi and Argentina lifted aloft football’s greatest prize in Qatar, but attention has swiftly returned to what has been a compelling domestic season.

Several stars have hit the ground running since the Premier League’s restart, instantly finding their groove after a return to club action.

Here are the five Premier League players with the most goals in all competitions since the World Cup.

One man’s misfortune is often another’s opportunity and Eddie Nketiah has been the beneficiary of cruel luck to a teammate.

Gabriel Jesus has been outstanding since his summer move to Arsenal, but is facing a spell on the sidelines after sustaining a knee injury at the World Cup. Nketiah – who had not started a Premier League fixture this season before the World Cup – has been thrust into the side with the task of keeping alive Arsenal’s title challenge.

Eddie Nketiah has a better goals-per-minute record than Gabriel Jesus this season.

Should he start ahead of the Brazilian? 👀 pic.twitter.com/fbGlo1cr4F

The 23-year-old has responded in fine fashion, scoring in Premier League wins against West Ham and Brighton. He added two further goals as the Gunners progressed in the FA Cup at the weekend, netting twice in the 3-0 win at Oxford United.

Nketiah has now scored 17 goals in 23 starts for Arsenal in all competitions since the start of last season, with the Hale End graduate having proven a capable replacement for the stricken Jesus.

Pep Guardiola was critical of Riyad Mahrez’s form earlier in the season, but the winger has returned from the season’s break in fine form.

The Algerian has scored four goals in five appearances in all competitions, including a double as Manchester City thrashed Chelsea 4-0 in the FA Cup third round on Sunday. Mahrez also scored the winner as City won at Chelsea in the Premier League last weekend, extending his record to eight goals in 15 starts this season.

Magic from Mahrez 🪄@Mahrez22 with an unbelievable free-kick for @ManCity 😳#EmiratesFACup pic.twitter.com/UlirKf9lnL

The 31-year-old had to settle for a peripheral role during the opening months of the campaign, but now appears back to his best with Guardiola lavishing praise on Mahrez this week.

“When they play in this way, and maybe complain [about not playing every game] I say ‘yes, you’re right’,” Guardiola told the club’s official website.

“Before, he cannot complain because he wasn’t playing at the level he is now. It’s not just about quality, it’s more in football, you have to do more.

“[But] now since we came back for World Cup, he is playing really, really well.”

Harry Kane has bounced back from his World Cup disappointment in the only manner he knows how, scoring goals in the Premier League.

Kane has now scored 15 goals in 18 league appearances this season for Spurs, while he has four in four games since returning from Qatar.

The 29-year-old celebrated his 300th appearance in the Premier League with a brace against Crystal Palace last week, with no player having ever scored more goals (198) in the division at that milestone.

He’s now just two goals from joining Alan Shearer and Wayne Rooney in the Premier League’s ‘200 club’, having levelled the latter’s all-time record for England at the World Cup.

Next in his sights is Jimmy Greaves’ club record for Spurs, having moved one goal behind the goalscoring great at Selhurst Park.

Erling Haaland’s phenomenal goalscoring season has continued post-Qatar, with the Norwegian rested and recharged ahead of the second half of the campaign.

Haaland has four goals since the season’s restart, taking his total to a stunning 27 goals in 22 games across all competitions for Manchester City this season.

The 22-year-old has scored 21 goals in the Premier League alone, just two short of the total that saw Son Heung-min and Mohamed Salah share the Golden Boot in 2021/22 (23).

Haaland’s 21 league goals are more than nine Premier League teams have scored in total this season, including tenth-placed Chelsea. The numbers are remarkable and sure to continue rising.

Marcus Rashford is in the form of his life right now, following a scintillating run of performances since returning to club action.

Rashford shone for England at the World Cup despite limited involvement, finishing as the Three Lions’ joint-leading scorer with three goals in Qatar.

The 25-year-old has seven goals in his last six appearances for the Red Devils, having come off the bench to score twice in the club’s 3-0 win over Charlton in the EFL Cup quarter-finals.

He has 15 goals in all competitions this season and is on course to break the 20-goal barrier for the third time in four seasons. Sharp, strong and confident, Rashford has rarely played better than he is right now. It’s a welcome sight for Erik ten Hag and Manchester United.