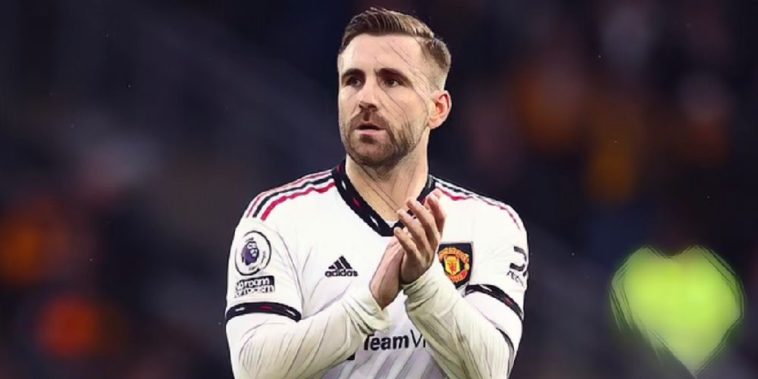 Erik ten Hag has praised the performances of Luke Shaw after the full-back has played in a central role in Manchester United’s last two outings.

The England left-back has operated as a centre-back alongside World Cup winner, Raphael Varane, in the wins over Nottingham Forest and Wolves, keeping clean sheets and looking relatively comfortable in each.

His selection at centre-back comes despite Harry Maguire being on the bench for both fixtures, while Victor Lindelof was also among the options at Ten Hag’s disposal at Molineux.

Speaking ahead of Manchester United‘s game against Bournemouth on Tuesday, Ten Hag was asked about his decision to play Shaw alongside Varane, and while suggesting illness as a reason for his inclusion, said that Shaw being left-footed was also part of his decision-making.

“Of course you have your ideas, and a plan, but sometimes it changes by circumstances like illnesses from Harry [Maguire] and from Victor [Lindelof],” Ten Hag told his the media at his pre-match press conference. “Normally they should have started in the games we just played, but then Casemiro did well as a centre-half, Luke Shaw against Forest did very good.

“Also you look into the game plan, the way we have to approach Wolves, and I thought it was the best match with Rapha [Varane] and Luke. Especially defending-wise, we know the speed from Wolves over on the right side, and he [Shaw] could cover that because we want to attack over on the left side with offensive game from Tyrell Malacia so that was a good fit. And also in possession, you always – with a left foot – get better angles on the pitch.”

Asked if Shaw could have a long-term future as a central defender, the United boss said that it was nice to have an additional option.

“We have seen the last two games. I think he did fabulous and was impressive, but we know also he is really good as a left full-back but it’s an extra option and that is always good for a team.”

Scott McTominay and Lisandro Martinez have missed the last two games, though the Dutchman said he was ‘quite optimistic’ about both of them returning to the squad on Tuesday night.

“We have to see. Both were training yesterday and today, so I am quite optimistic about [them] returning to the squad, both of them.”