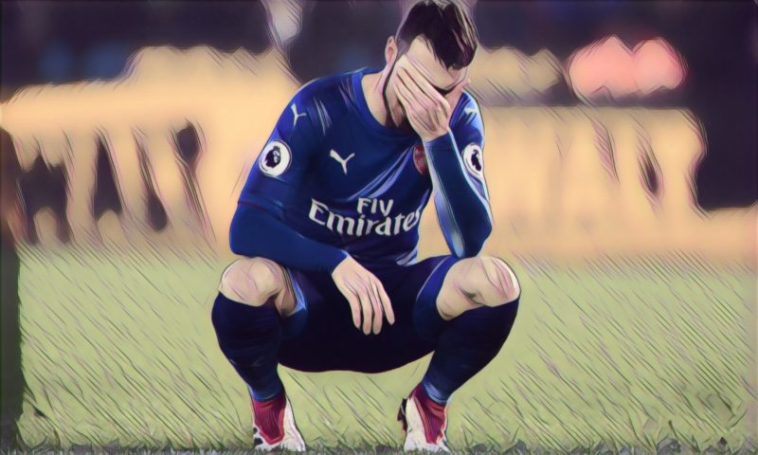 Relegation fighters Swansea defeated Arsenal 3-1 to add three more points to their tally to find themselves outside the relegation zone. Here are five things we learned from the game.

This was not the first time Granit Xhaka’s lack of concentration and awareness in the midfield has lead to an opponent scoring. It has been happening time and time again throughout the season. And it is much more than a bad patch. Xhaka has really been very poor defensively, and Arsenal have had to face consequences as a result of that. It all started with the first game of the season against Leicester, and the problem has continued for Arsenal ever since.

Arsenal need to do something about that, maybe get a decent extra man behind to cover Xhaka and his midfield partner. Elneny was doing the job for Arsenal last night, but not effectively enough. So Arsenal might want to get into the market to find a decent defensive mid in the summer.

Yesterday’s loss was a continuation of Arsenal’s poor away games record this season. The Gunners have only managed to get three wins out of 13 away games this season. The Gunners have the worst away record among the top six. It looks close to impossible for Arsenal to get a place in the top four at the end of the season now. So, the only way to get into the Champions League now for Arsene Wenger’s side remains via the Europa League, replicating Manchester United from last season.

Good days ahead for Swansea?

Two back-to-back wins against the mighty Liverpool and Arsenal have boosted Swansea City’s hopes of survival. The win took Swansea from 20th to 17th in the table. The Swan’s will expect these performances more consistently from their big players.The likes of Jordan Ayew, Alfie Mawson and Sam Clucas will have to step up, if Swansea want to stay up. The relegation battle has heated up with just 7 points separating the bottom half of the table. So Swansea might have just picked up an important six points in their last two games.

Petr Cech couldn’t control a backpass by Shkodran Mustafi and ended up gifting a free third goal to Swansea’s Jordan Ayew, who did not make a mistake as he put Swansea 3-1 up. The goal was enough to confirm Swansea’s win. Arsenal have had this problem with Cech for quite a long time now, and should be getting a replacement in the summer.

Petr is 35-year-old and Arsenal know they need a long-term replacement for the veteran who’s way off his best. While many suggest Arsenal shouldn’t have entered into the season with Cech as their first choice, Arsene Wenger still gave the former Chelsea ‘keeper another year as the club’s first choice. That decision from Wenger has cost Arsenal some points this season.

Jack Wilshere missed the game for Arsenal due to illness, and his absence was clearly felt on the field. Wilshere has cemented his place in the Arsenal team in the last couple of months, and has performed really well in that time. The way he guided and drove his team forward was something Arsenal clearly missed last night.

There was no ball carrier for The Gunners in the midfield who could do that. Xhaka was having a bad game and Ramsey, who had just returned from an injury, lacked the sharpness of an in form player. Even when Mkhitaryan came on late in the game for Arsenal, he couldn’t have much of an impact.