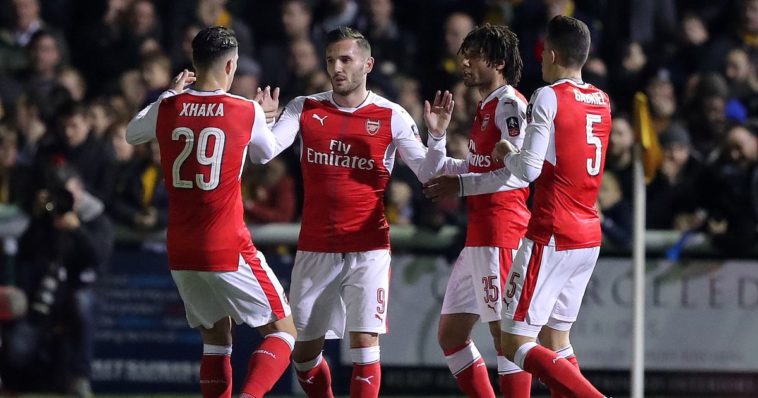 Arsenal cruised their way through to the FA Cup quarter final after coming away from their fifth round tie against non-league side Sutton United with a 2-0 victory keeping their hopes for a trophy this season, very much alive.

Goals from Lucas Perez and Theo Walcott concluded business for the Gunners at the Borough Sports Ground in Gander Green Lane. After dispatching the lowest ranked side with ease, the North Londoners will now play fellow non-leaguer sideLincoln City next month for a place in the semi finals.

The first 20 minutes of the game were really slow as both Arsenal and Sutton couldn’t find anything to trouble the opposition’s defence. Arsenal however, neat and tidy as usual, kept majority of the possession and kept passing the ball in search of the one odd chance to find a breakthrough.

That breakthrough came in the 26th minute when Lucas Perez cut in from the right wing and tried to find Theo Walcott in the middle. His low cross was missed by the striker and deceived Sutton’s keeper to go into the net as the opening goal of the night.

Sutton did have a chance at the brink of half time when David Ospina gifted a sloppy loose pass to Adam May whose weak foot strike went just off target.

It looked as though Arsenal were the team who would get the second goal and they delivered in the 55th minute. Theo Walcott scored after a Nacho Monreal pass and registered his 100th goal for the club. Arsenal’s captain on the day, was the 17th player in the club’s history to reach the 100 goal mark.

Relief for the Gunners

Sutton striker and former Arsenal man Roarie Deacon did surprise Arsenal though. His sensational 25 yard strike hit the cross bar, much to the relief of David Ospina.

Arsenal looked a much better side in the second half when Alex Oxlade-Chamberlain came on for Mohamed Elneny who looked to have picked up a slight knock in the first half. The Ox went for an excellent searching run in the 68th minute but managed to put in a poor cross for his teammates keeping the advantage limited to a two goal margin. He came close again at the end of the game, but his effort was saved again by the Sutton keeper.

Arsenal now face another non-league side Lincoln City in the FA Cup quarter final next month. Lucas Perez and Oxlade-Chamberlain were two massive positives for Arsenal on the day.

Lucas Perez has been directly involved in 9 goals in 8 starts this season, whilst Oxlade-Chamberlain looks really comfortable in his new role in the central midfield. I don’t see a reason why the duo, especially Lucas Perez, with Iwobi having a really poor last few weeks, won’t start against Liverpool, who Arsenal face at Anfield in 12 days time. Big game ahead for Arsenal.