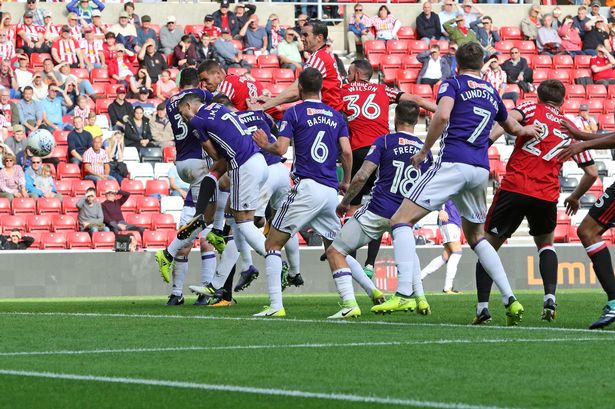 Sunderland’s woes continued in the Championship as the slipped to their third defeat in just six second tier games with a 2-0 defeat to Sheffield United.

Simon Grayson’s side returned fresh after the international break with winger Aiden McGeady picking up a knock on Republic of Ireland duty, thus ruling him out of the Blades clash. New signings Marc Wilson and Welshman Jonny Williams made debuts while deadline day signing Callum McManaman would start on the bench.

Chris Wilder would lead his Sheffield United side into the game looking strong in attack with pacy former Birmingham City striker Clayton Donaldson partnering veteran hitman Billy Sharp. Lee Cattermole and Bryan Oviedo were ruled out with injury that saw Jack Rodwell and Brendan Galloway coming in for the home side; Grayson also dropped Jones for Wilson with Browning moving out to right back. Sunderland hadn’t won at home for nine months prior to this fixture.

Sunderland started off looking the better side but as so many Sunderland fans will tell you that they never take their chances, not that there were many at the Stadium of Light. In the opening 20 minutes the Wearsiders dominated but gradually let the visitors grow into the match. The clearest cut fell to James Vaughan who bicycle kicked it comfortably to former Chelsea reserves player Jamal Blackman.

Neither side had many other chances in a fairly lackluster game, apart from a few early set pieces which were easily dealt with by the imposing figure of Blackman. Jonny Williams looked energetic for the Black Cats and really looked like the only one that wanted the ball.

Wilson defended fairly well up until conceding the goal just after the 20 minute mark. United took the lead from a Sunderland corner which was poorly executed and cleared to Donaldson. He beat Ndong and the outstrenghted Galloway, before debutant Wilson stood off and stood off allowing the summer recruit to smash it towards Ruiter’s near post from the edge of the area, with the ball going in after shaving the woodwork and beating the Dutchman at his near post.

Blades have the cutting edge

Once Wilder’s men were in front they gained confidence in every step and a deep cross from the Blades full back found the head of danger-man Donaldson who glanced the header towards the Mackems’ net only for Ruiter to turn over.

It was an uneventful second half for Sunderland fans, who watched  the South Yorkshire side peppering the Sunderland area with crosses from the poorly defended left hand side. Sunderland did have a penalty shout as Williams was pushed in the back. A penalty should’ve been given but the referee waved it away, but this was the only way Sunderland looked like scoring.

Nothing notable went on until Clayton Donaldson bagged his and the Blades’ second of the game. This proved to be too much for a vast majority of home fans who booed and walked out, all of which had a very good right too. Donaldson was slipped in by a sublime through ball by David Brooks before finishing in the top left hand corner past the low diving Ruiter. In the aftermath of the goal, the scorer made a meal of an injury in the goalmouth that sparked fury in the home end and one fan lobbed a bottle at his head while he was on the deck.

Sunderland bagged a late consolation in injury time through the rather unliked central midfielder Jack Rodwell, the former Everton man flicked on substitute Callum McManaman’s free kick past Blackman who will be disappointed he couldn’t keep his clean sheet but Wilder will surely be happy with all 3 points. At the full time whistle the atmosphere turned sour and toxic pretty quickly with the few fans still left booing the players off.

One Sheffield United fan, Nick Broomhead, wrote on Twitter “Sunderland fans might have the best supporters in the world – they’re not even loud but turning up every week to watch that sh*te is heroic.” Which really sums up Sunderland supporters, it’s still unbelievable that 26,000 willingly pay to watch them. In his post-match interview gaffer Grayson claimed “it hurts all of us”, well it hurts the fans a lot more as they’re paying good money to watch spineless performances each week. The Stadium o Light boss went on to say that “his players did try and worked 100%” after being questioned by a reporter, if that’s the case then how are Sunderland being outplayed week in week out? Ask any Sunderland fan or a football fan in general would tell you it was a half-hearted performance.