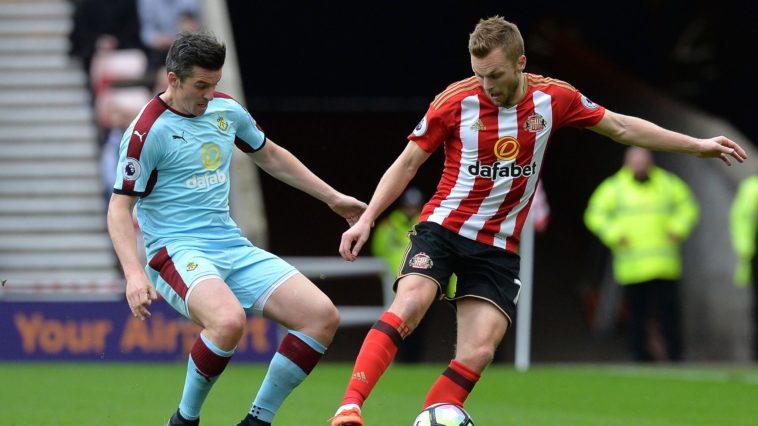 Burnley had one of the worst away records in Premier League history. Before their trip to Wearside they’d only picked up one point on the road. The Clarets have only scored 8 goals away from home all season, Sunderland have only scored one in their last 7 games.

Sunderland owner Ellis Short made only his second appearance of the season at the Stadium of Light. Black Cats supporters are unhappy at the way the American businessman is running the club and some blame Sunderland’s poor position on his lack of investment.

A very uneventful game saw the first talking point come afree 20 minutes. Burnley had a penalty shout when George Boyd’s shot was charged down by Darron Gibson. There was a suspicion of handball, but referee Madley turned down the appeals. The referee judged this incident as face protection, therefore not awarding a spot kick.

Not long after this, Burnley complained to the referee again. This time for centre half Ben Mee being down injured whilst the counter attacking Sunderland didn’t put the ball out of play, although Burnley had played the advantage. Ashley Barnes then horrendously missed from just six yards out after scuffing his shot wide, despite being unmarked.

Second half saw Sunderland come out the better team. Italian Fabio Borini fluffed his lines when he ran through but his shot rolled into the hands of England international Tom Heaton.

Darron Gibson was lucky not to be given his marching orders. The Irish midfielder tackled over the ball, luckily for Sunderland he only received a yellow card.

Minutes later, Jermain Defoe played a delightful cross into the danger area but Tom Heaton was equal to Adnan Januzaj’s shot. Bryan Oviedo managed to make an equally good cross in the same play but Seb Larsson failed to hit the target as he skied his half volley.

Minutes later came the best chance of the game. Burnley were denied a soft penalty claim. Sunderland counter attacked with the blistering pace of Januzaj. The Belgian failed to cross but passed to Seb Larsson who played in a delightful ball to the back post. Right back Billy Jones met the ball but failed to net with his diving header from a few yards out. You’d expect him to score, however it looked like he was trying to head it back across the 6 yard area for Jermain Defoe. The wrong choice.

Adnan Januzaj came close when Michael Keane failed to clear his lines. The clearance went straight to Jones, who squared it to Januzaj on the edge of the area, but the Belgian dragged his shot wide. Substitute Khazri made a difference but it wasn’t enough for Sunderland.

Towards the end, Oviedo cannoned a pass to Denayer who couldn’t control it and Jordan Pickford was forced into making a testing save from Sam Vokes.

Substitute Didier Ndong was a more of hindrance than a help. The Gabon international gave the ball away far too often and even got himself booked. Just before the end though, Borini had one last opportunity to give the Red and White army a goal but the Italian had his effort parried away by goalie Heaton.