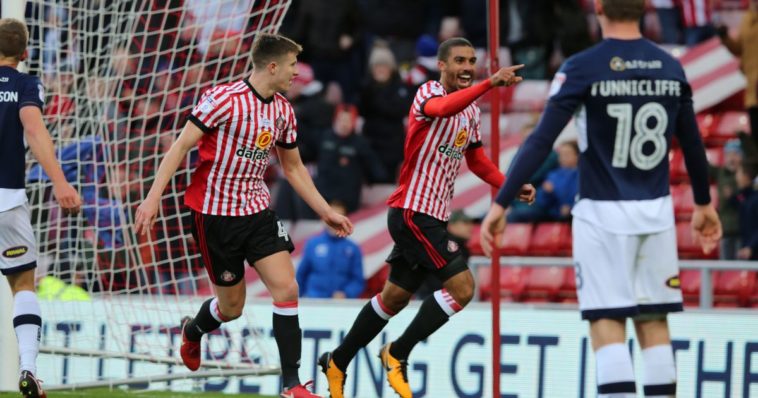 Sunderland equalled their longest streak without a home win (20) with a 2-2 draw against Millwall to leave them rooted to the bottom of the Championship.

Interim manager Robbie Stockdale took sole charge after Billy McKinlay resigned to join ex Sunderland gaffer David Moyes at the London Stadium. The caretaker boss made a few changes to the side that were beaten at Boro before the international break, with Jonny Williams coming in for Gibson, Watmore in for Ndong and Matthews in for Jones.

Sunderland started off well and had a few half chances in the opening period, getting fans up for the game. Aiden McGeady had his shot deflected and then pushed wide for a corner. But the first real opportunity came for star striker Lewis Grabban, who capitalised on some dodgy goalkeeping from Jordan Archer. Bryan Oviedo’s corner caused chaos for the Scottish goalkeeper who spilled it out on a plate for Grabban who tapped in from inside the six yard area.

Robbin Ruiter then displayed some suspect goalkeeping himself; George Saville swung a free kick goalwards, won after Williams stupidly slid in, the Dutchman caught the ball as it was dipping onto the floor. However, he proceeded to let the ball slip from his grasp, under his body and it trickled across the line – a similar piece of goalkeeping to that of former Manchester United keeper Massimo Tiabi against Southampton’s Matt Le Tissier.

Only a few minutes later, Ruiter was again faced with another free kick from Saville, and again didn’t cover himself in glory. The former Utrecht keeper’s positioning was similar to Jason Steele’s at Brentford: pathetic. A professional goalkeeper shouldn’t be misjudging a free kick, when minutes earlier he made the same sort of error. Again the goalkeeper’s inability to catch cost us, Ruiter palmed the former Chelsea youth player’s free kick into the top right corner, giving the visitors the advantage.

Duncan Watmore had to go off injured, not before he had one last chance though. He cleverly beat three defenders before being taken out in a strong tackle just yards from the Lions’ goal. This consequently finished the injury-prone winger’s afternoon early. His replacement Callum McManaman would have a similar run down the right hand side just before the break but he went down far too easily.

Early in the second half Welsh full back Adam Matthews charged down the flank and played in a rather poor cross, only for the fourth goalkeeping error of the day cost Millwall the lead. Archer appeared to punch it into the roof of his own net. Rather than simply catching a poor delivery, he turned it into a goal for the home side. It was credited as a Matthews goal, his first competitive finish in red and white, this was due to it being on target.

Moments later, Lewis Grabban had the ball in the net again only for the officials to disallow the goal for a foul on full back McLaughlin. I must say it was a very harsh decision; me the people around me in the stadium couldn’t, at first work, out why referee Tim Robinson had overruled it.

Ruiter did however make a good save to deny striker Lee Gregory putting Neil Harris’ men in the driving seat. Steve Morison’s flicked through ball eventually got it’s way to Gregory, who’s shot took a deflection and wrong footed the Dutchman, only for him to make a good recovery and turn it away from danger.

Both sides towards the end lacked urgency, especially Sunderland though. You would’ve thought it was Sunderland trying to protect a lead or a point; if anyone was going to win it, it was going to be Millwall on the counter attack.

I have recently given Jason Steele some heavy criticism but Ruiter hasn’t displayed himself as much better. As for the back line, still not good enough – the full backs are still consistently failing to close down crosses, and the centre backs are backing off. Midfield – firstly, Lee Cattermole: an absolute joke of a player; some fans love him because he runs about a lot and ‘puts a foot in’, when realistically he dives in carelessly and picks up stupid bookings, he doesn’t show 100% as his head’s down most of the time, he cannot string a pass together, he isn’t an attacking threat or a defensive help, more of a hindrance, so my question is: what does he actually do? McNair was decent but still needs game time, as I personally don’t think he’s 100% fit, Williams and Watmore are both injury-prone and were subbed of first half.