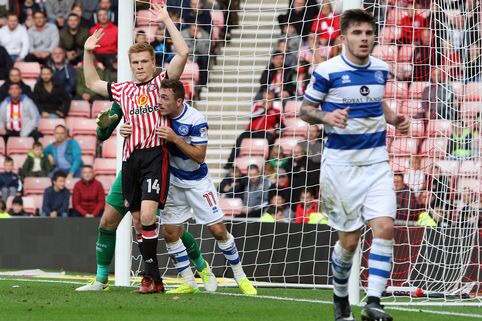 Sunderland continued their record of not winning at home since December, with a 1-1 draw against QPR.

Simon Grayson made changes from the team that were held by Preston before the less than exhilarating international break. Ty Browning dropped out with a groin strain and right back Billy Jones somehow managed to fit in at centre half, one of Grayson’s many questionable decisions on Saturday. Lewis Grabban returned to the bench from injury and Williams and McManaman were only fit enough for the bench.

The first chance arose for winger George Honeyman who forced a good save from Alex Smithies as a result of a set piece.

Idrissa Sylla tested the goalkeeping capabilities of Jason Steele from range, and proved nothing new: Steele is rather shaky and has a tendency to spill the ball.

Costa Rican left back Bryan Oviedo’s long range drive may have took a touch off Watmore in the area but it was always sailing to the side of the R’s goal.

Irishman Aiden McGeady then had a golden opportunity to break the deadlock after some great counter attacking; he stormed into the area only to scuff his effort harmlessly wide. Sunderland fans could only think what would’ve happened if he’d have squared it to striker James Vaughan.

The deadlock was eventually broken, shortly before half time. Striker Sylla nodded home after some rather questionable goalkeeping from Steele, the Boro born shotstopper came off his line but failed to collect the ball and was consequently punished.

A fruitless second half followed, QPR showed a bit dominance over a poor home side, although Holloway’s men looked below average themselves. The hoops peppered Steele’s goal with half chances and forcing routine saves.

The only way the Wearsiders equalised was through Aiden McGeady’s individual magic, arguably the man who’s kept Grayson in a job. The Glasgow born winger hit a peach of a shot from 25 yards into the bottom left past ex Huddersfield goalkeeper Smithies.

A long range effort towards the end had fans on the edge if their seats when Steele looked to have parried a shot straight at him into his own net. Fortunately it was pushed wide but more suspect goalkeeping on show from the black cats’ number one.

Apart from McGeady’s magic, Sunderland never really looked like scoring. Watmore looked nackered by half time and arguably two of the more gifted players started amongst the substitutes. Grayson played two holding midfielders at home to a below mid table side, a game fans will have fancied their chances.

Lee Cattermole seemed to be the most pointless player on the pitch – I propose the question: what does he actually do? Apart from give the ball away, make stupid tackles where he puts himself out of the game and puts his teammates under pressure. As well as not being an attacking threat or a defensive help.

On another day, against a better strikeforce it would’ve been about four or five to the opponents. The defence looked poor and uninterested, Koné has disappeared somewhere, probably with his agent and Jones, a fairly average right back played centre half. As well as this and leaving McManamam and Williams on the bench he started Watmore who isn’t fully fit. Grayson’s tactics seem clueless and uninspired, Honeyman somehow managed to get a considerable amount of game time but seems exempt from criticism because he’s a local lad.