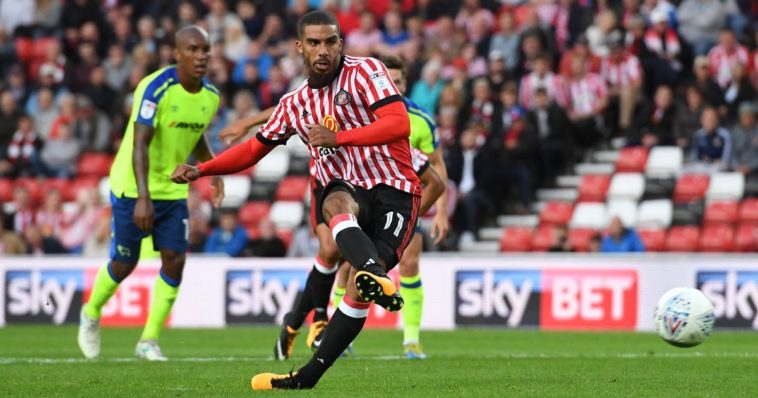 The Championship season is back, and Sunderland started life in the Championshio with a 1-1 draw against Derby.

Sunderland started their Championship campaign against Derby County at the Stadium of Light in front of Sky Sports cameras. Simon Grayson managed his first competitive match for the Black Cats against Gary Rowett’s Rams.

Sunderland started brightly and had a flurry of chances early on, the first coming for George Honeyman after some good work down the right between Jones, Honeyman, Ndong and then Lewis Grabban’s fantastic throughball for the academy graduate – but Honeyman was unable to get a good strike and instead sent a delicate chip just wide. Auden McGeady followed in but just played it back across the 6 yard area for the arriving Grabban who vollied high and wide.

Then, against the run of play, Derby broke the deadlock though Bradley Johnson who finished a deflected Johnny Russell cross after some poor defending by on loan Everton left back Brendan Galloway. Jason Steele failed to keep a clean sheet on his competitive debut as he let Johnson’s shot go under him.

Steele then had some Sunderland fans questioning his capabilities when he let Tom Huddlestone’s thunderbolt of a shot slip out of his hands, luckily centre back Tyias Browning was on hand to slide in and return the ball to the former Blackburn goalie.

Aiden McGeady’s free kick then caused problems after Galloway was fouled in the left corner, Billy Jones flicked it on but neither Koné or Grabban could get enough contact to direct it goalwards instead it was cleared to the penalty spot where skipper Lee Cattermole waited and certainty tested former England goalkeeper Scott Carson who turned it out for a corner.

Minutes before half time the Wearsiders were awarded a spot kick by referee Olivier Langford after Derby’s Jacob Butterfield was judged to have handled the ball inside the area. On loan Bournemouth striker Lewis Grabban converted from 12 yards sending a pinpoint penalty into the bottom right corner despite Carson diving the right way, this means Sunderland haven’t missed a competitive penalty in a match (excluding penalty shootouts) since Seb Larsson had his effort saved at Molineux v Wolves back in December 2011. Strike partner James Vaughan had missed two in pre season against St. Johnstone and Celtic, so some fans were relieved when Grabban stepped up and converted.

The second half began brightly for the home side as Lewis Grabban worked down the left for Brendan Galloway to whip in a cross Honeyman’s shot was blocked and then Vaughan’s effort trickled just wide of the goalposts. Derby then had a chance from a Huddlestone corner captain Keogh had his header headered off the line by opposing captain Cattermole. Lee Cattermole intercepted and ran through squaring it to Grabban on the edge of the area only for the former Reading loanee to rattle Carson’s woodwork.

Derby then had the pick of the chances to win it when substitute Matej Vydra ran through beat Browning and rolled it to striker Chris Martin who would’ve usually tested the goalkeeper from that range but instead blazed it over the bar from 14 yards out, squandering the opportunity to take the lead. Another Derby chance went begging when Bryson headed down in the area for once Sunderland transfer target David Nugent who fluffed his lines and goalie Steele was able to get a hand on it and allowed Ndong to clear to safety. Overall a satisfactory performance from Sunderland but good performances won’t get Grayson’s men back to the Premier League, winning will and the Black cats need to win home games if they want a shout in promotion.

Didn’t have much to do. Let one shot slip and nearly cost us. Made a crucial save at the end from Nugent.

Didn’t do too much apart from the basics. Had one shot which amused most fans.

Evident he doesn’t really want to be at the club but done every thing well.

Was either too far away from the man or too close. Was better attacking than defending. Mainly at fault for the Derby goal.

Was brilliant controlling the midfield and had a brilliant pass accuracy and nearly scored.

Done all the basics right. Creating a lot from central midfield.

A little bit selfish but Sunderland’s most creative player on Friday night.

Very energetic. Wins the long ball but end product doesn’t seem to be there.

Got a goal on his competitive debut. Created a bit and troubled the Rams’ defence and hit the post.

Sunderland made no subs in a game crying out for fresh legs, especially on the wing. Wahbi Khazri was an unused substitute but could’ve been the difference.

Didn’t have much to do. Made a really good save.

Another solid performance from the Irishman.

Beaten too often by Honeyman but overall decent.

Gave away a penalty. Didn’t have an impact.

Great return for him. Tested Steele a few times.

Got the goal for the Rams. Didn’t have a great impact.

Done well to get the ball in the area for the goal. Decent performance from the fans favourite.

Not a great performance from Scot. Should’ve won it for Derby.

Didn’t cause the defence any triuble at all.

Troubled the defence with his pace which may warrant the Czech a start next game.