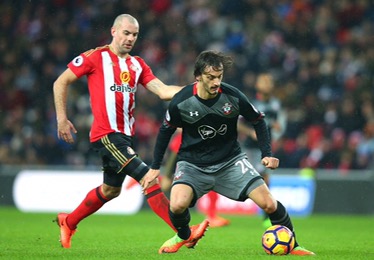 Sunderland provided a Comedy of Errors at the Stadium of Light on Saturday, falling to a humbling 4-0 defeat.

Once, in the 1990s, my now long deceased Grandad sat me down and told me all about how the world used to be. ‘We had rationing, during the war’ he said

‘The only chocolate I had between 1936 and 1950 was some wood painted brown and I had to whittle it from the fuselage of a crashed Cessna. Gentlemen wouldn’t leave the house without a hat or flat cap on, we had to wear them to fool the giant predatory spiders that terrorised our metropolitan populaces with their laser eyes. We’d all go down the cinema, pay in bottle caps and watch Pat Bonner attack Mars on a Segway.’

Some of this might may be misremembered and also he might have been getting a touch of alzheimers in his advancing years, but I do remember quite clearly one thing he told me, he said ‘Steven Pienaar used to be able to run’.

​‘What? No way!’, I replied, but he insistently nodded. ‘In my day, Steven Pienaar could travel at the pace of an adult man.’

I was flabbergasted. Steven Pienaar, the man who recently on a holiday to Hawaii fell into the sea because the Pacific Tectonic Plate beneath the beach beat him for pace, apparently used to be able to travel short distances with relative ease.

‘All of the Sunderland players did’, my fictional comedic prop grandfather continued, ‘In 1910 there was talk that Fabio Borini actually once controlled a ball and Sebastian Larsson put in a good cross from a corner’.

Well it was a different age, that’s for sure. A time of prosperity, hope, and children dying from easily preventable diseases.

Surely it was a far cry from Sunderland’s capitulation on Saturday at the hands of a Southampton side who weren’t even very good. In my imaginary grandad’s day, Sunderland’s five man back line would have been able to keep out four fairly straightforward goals, all of which were easily preventable had Lamine Kone and Jason Denayer put in an iota of effort and concentration.

Sunderland seemed on top in the first ten minutes. Newly installed Darron Gibson startlingly doesn’t seem to have the milky cataracts that are usually integrated in Sunderland midfielders which prevent them from seeing the opposition half. Sebastian Larsson got close enough to a player to tackle them, and Vito Mannone kicked a ball within a 30 degree radius that he intended. Sunderland appeared to be recreating the form that saw them run out 4-0 winners against Crystal Palace a week earlier.

​By the time half an hour of the game had passed, they had been sussed. Gibson had been dictating the wearsiders’ play from space he’d found in and around the centre circle. Southampton boss Claude Puel saw this, tightened up Steven Davis’ positioning on the former Everton man and essentially marked him out of the game. Once Sunderland couldn’t play through central midfield, and with no wide players to speak of, they resorted to punting long balls up to a lone and demoralised Jermaine Defoe who had to compete for headers against players twice his size.

This allowed Southampton to continuously collect the ball and mount attack after attack in the first half, and it wasn’t long before they broke the deadlock. All of Southampton’s goals were unforgivable from Sunderland’s perspective.

From Manolo Gabbiadini ghosting through a bank of three centre halves to nod in his first, to Lamine Kone’s giving the Italian far too much room to turn and fire for his second. Southampton’s third and fourth goals were a Jason Denayer own goal, and an invitation to Shane Long to pick his spot.

I was going to write those last four lines a bit more humourously, but I honestly got too annoyed while thinking about the match. I rewatched the highlights for this article, but I pushed a fork into my thigh the entire time. Honestly, we were so far away from Southampton on Saturday we may as well be the Isle of Wight.

​Sunderland’s substitutions sum up exactly why we’re getting relegated. A glacial Steven Pienaar, a Wahbi Khazri who seemed so bored by this season’s demotion that he’s decided his contract doesn’t include passing to team mates, and the sad tale of Fabio Borini, a player who’s already limited ability has seemingly been stolen away by the aliens from Space Jam.

Somewhere in the cosmos there is a game going on with an alien monster who has a record of about one in four and can’t beat a fullback. Its hard to blame the fans who streamed from the stands in the final half hour. Sunderland exhibited nothing of worth all day, their first shot on target coming at around the 60 minute mark. What will they tell their grandchildren about when recounting this era of Sunderland AFC?

‘Eeeh, I remember when we signed Joleon Lescott, a player who’s talents were having a battle with his hairline to see which could recede the fastest. I remember Adnan Januzaj getting caught by a gust of wind and dancing like the plastic bag from American Beauty. I remember John O’Shea’s knees finally rusting over, him having to be dragged from the pitch by a quad bike and melted down for parts’.

​Sunderland have been poor this season, sure. We’re bad every year. But I think this game was one of the worst I’ve watched in the last few campaigns. It was devoid of intent, intelligence, intensity, or incident, and with Sunderland facing Everton in a couple of weeks, all eyes will be on David Moyes.

There are currently no signs that the outcome will be any brighter. My grandad would be spinning in his grave, if it existed and I hadn’t just made him up.

Check out the Player Ratings for this match

We hope you enjoyed this article more than Sunderland fans enjoyed the game itself. Please leave a comment below and of course share it on social media using the links.