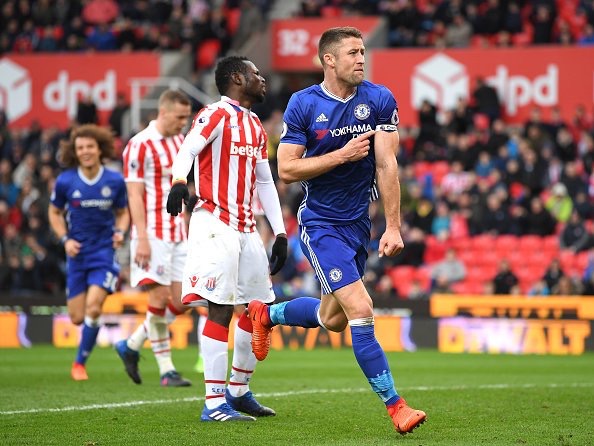 In a scrappy affair at the bet 365 stadium, Chelsea continued their march to the title with a late winner.

Stoke were arguably the better of the two teams in the first ten minutes but failed to trouble the Chelsea defence. But it was Chelsea who broke the deadlock with a clever free kick from Willian catching out Lee Grant. Grant undoubtedly wasn’t alert enough but you can’t deny the ingenuity of Willian.

Most the first half was stop start as battles between Costa and Shawcross, as well as Walters and Luiz were continually breaking up the rhythm of the game.

Stoke then came much more into the game and appeared to have equalised through Bruno Martins-Indi. The goal was disallowed for a Berahino push on Azpilicueta, it’s a decision Chelsea fans will advocate and Stoke fans will contest.

Stoke eventually drew level from another contentious decision as a penalty was given. Whilst the referee gave the penalty for a Cahill push on Walters, it appears on replays Walters went to ground for a clip on his ankle. Walters duly stepped up and smashed the ball home into the top left of the net.

The main pattern of the second half was more and more pressure from Chelsea, and the odd threatening set piece of counter from Stoke. The Potters did well for long spells to deal with the Chelsea pressure with a special mention to Geoff Cameron who was integral to slowing down Chelsea’s attacks.

Chelsea came close with Marcos Alonso hitting the bar and Diego Costa hitting the post. Stoke also had chances with Ramadan hitting a volley wide and a couple of scrambles from corners.

But in the end, it fell apart for Stoke as Cahill put Chelsea back in the lead from a poor Pieters clearance after a corner.

Phil Bardsley also saw a second yellow for a poor challenge on Fabregas, seemingly due to frustration.

Overall stoke fought very hard on Saturday afternoon but Chelsea did what any title challenging team must do and dug deep for the win.

Please support Football Faithful by sharing this article across social media using the links below.