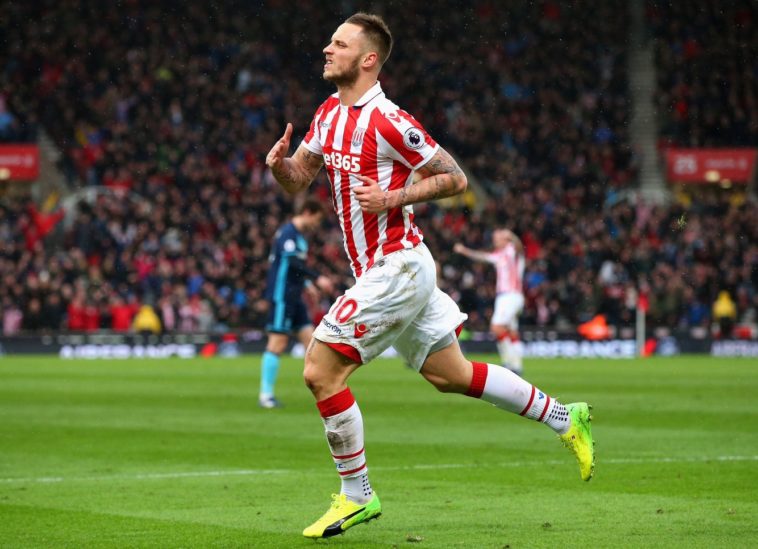 After joining in the summer as an unknown Sohbi has had to bide his time to get into the team. Despite arguably only getting in the side due to Shaqiri’s injury, Sohbi has greatly impressed in the last few games with an assist against Palace and now a dazzling game against Middlesbrough.

He stayed very far out wide on the left side and gave Boro right-back Fabio an afternoon to forget. He found a way to get past the hapless fullback in stylish fashion almost every time he received the ball and was unlucky not to score in the dying minutes.

When stoke shelled out £3.5 million for his services in the summer I questioned the purchase as he was a large unknown coming from the Egyptian league. But his speed, strength and above all skill have shown that he is certainly good enough for the premier league.

2. Stoke could be in serious trouble without Arnautovic

In all honesty Stoke performed poorly today, not keeping the ball and very scrappy in midfield. The difference between the two sides was two moments of quality from the undisputed talisman Marko Arnautovic.

Two competent finishes from Arnautovic earned the Potters the three points today and without him I do wonder if they would still be lumbering around the relegation zone. Yes, there are other quality players but over a season they are very inconsistent and without Arnautovic I believe Stoke would be in bother.

At times, today when in possession Middlesbrough players looked like they’d no idea what their manager was asking of them. Many of the midfielders never looked interested in receiving the ball and as a result they often went long to Gestede.

With no one feeding off the big man he was incredibly isolated and became increasingly frustrated. The only saving grace for Boro today was the admirable spirit of the defenders who contested every 50/50 with strong desire, but unfortunately for them that counted for little in the end.

For a few weeks now Joe Allen hasn’t quite displayed the fine form he started life at Stoke with.

Other than his goal against Palace, he has struggled for form, often misplacing passes and showing heavy touches. The reason I understand him being in the team is undoubtedly his tireless work rate, but in games when we try to keep possession he often lets us down.

By no means am I slating Allen but maybe it’s time for a rest and give someone such as Imbula or Afellay a run in the team.

One positive of this very turbulent season for Stoke has been the consistency against teams they arguably ‘should’ be beating.

Last season they struggled at home with losses to Watford, Palace and a drubbing from Everton. Whilst they also haven’t had the same success against the big teams they enjoyed last year, I would argue that the consistency against teams in and around us in the table is a good thing.

Please check out the Full Match Report and read exactly how Stoke bagged the points at the bet365 stadium.