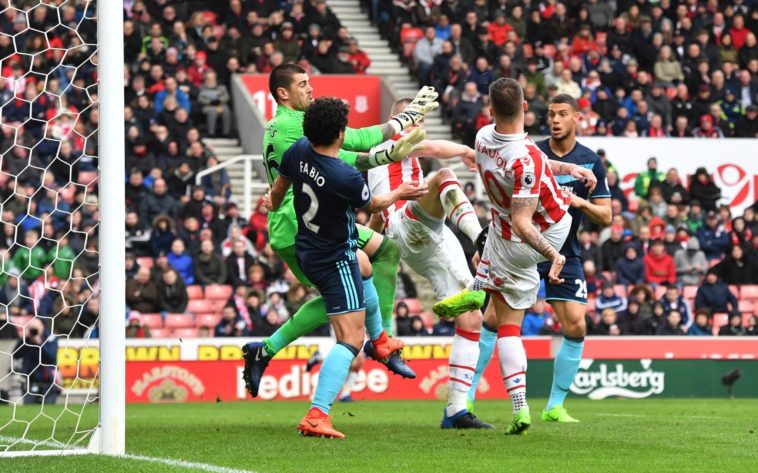 Middlesbrough once again put in a poor performance in this 2-0 loss to Stoke.

Boro made five changes from their defeat last week including returns for Friend, Clayton, Ayala, Gestede and Ledbitter. However from the get go Middlesbrough looked second best.

Middlesbrough travelled to Stoke in hopes of picking up a much needed there points to take them clear of the relegation scrap.

Stoke created countless chances and eventually broke through in the 29th minute. The goal came from a ball over the top by Glenn Whelan to Arnautovic. The Austrian turned defender George Friend, danced passed Valdes and slotted in to an open net.

Things went from bad to worse for Boro as poor defending by Espinosa lead to Crouch connecting with a Stoke corner and knocking it down for Arnautovic who scored his second of the game.

In the second half Boro somewhat came in to the game but a lack of creativity, attacking options and quality means they have now scored just one in their last five league games. Furthermore Middlesbrough have now dropped in to the relegation zone for the first time all season.

With Negredo scoring just 6 goals all season, Aitor Karanka decided to bench him and start Rudy Gestede. This was Gestede’s first start for the Boro and he was not great. The 6ft 4 striker did offer an aerial presence that Negredo does not. Despite this, he created very few chances and barely had a sniff at goal.

Although Negredo has not scored many this season, he does drop back more and try and create for the team. Something Gestede did not do very well.

The result was for most of the game, aimless long balls to Gestede who knocked them down to nobody resulting in Boro losing possession time after time. Negredo isn’t exactly great but this has proved he is currently Boro’s best striker.

Once again Middlesbrough opted for their go to 4-1-4-1 formation playing three defensive midfielders. This time it was the trio of Clayton, Leadbitter and De Roon.

Since switching to this formation after securing draws against Arsenal and Manchester City, Boro have looked less than dangerous in attack as the formation requires them to sacrifice the central attacking midfield position. Once again this formation hindered Boro today as the created very little all game.

This has meant they have scored just 19 goals all season. After failing to score in 9 of their last 13, it is surely time for a formation change.

Middlesbrough looked poor in attack once again. They created little to no chances, registering just two shots on target all game. That sort of stat is quickly becoming common in every Boro game. It is also a large reason why Middlesbrough have not won all year and are now in the relegation zone. If they wish to start scoring more a switch back to 4231 may be in order.

After last weeks battering from Spurs, Stoke where hoping for a much better showing this time out. They did not disappoint. Especially Arnautovic who scored both of Stokes goals.

After failing to score in his last 5 appearances in the Premier League, Arnautovic certainly came back to his best today. The Austrian was a handful for Middlesbrough all game.

George Friend made his return to left back for Boro after being out for 5 weeks with a calf injury and had one of his toughest challenges all season. Friend struggled to cope with the Stoke winger all game and was involved in the conceding of the opening goal.

Arnautovic then put the game to bed with his second goal. He connected with Peter Crouch’s header to turn the ball home past former Barcelona ‘keeper Valdes.

Arnautovic was Stokes best player on the day and my man of the match. Unfortunately his afternoon was cut short due to injury and he was subbed of in the 65th minute.

Overall Middlesbrough looked poor once again, creating very little up front and even looked shaky in defence today. Stoke on the other hand put in a much better performance than against Spurs. Arnautovic also looked as good as he ever has.