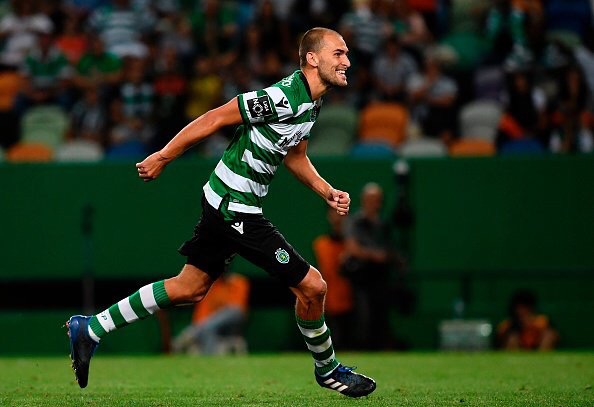 Sporting Lisbon’s season debut at home was a satisfying sequel to their previous league win, despite only managing to inaugurate the scoreboard in the last five minutes of the game.

Six minutes after kick off, a dangerous cross by Sporting sees the ball land right at both strikers’ feet. In a confusing mess, Dost manges to backheel the ball, ending in a tough shot by Acuña, deflected by the last defender.

Less than two minutes later, Acuña delivers a superb cross, but Gelson volleys it just above the crossbar.

The remaining minutes of the first half saw Sporting continue to dominate their attacking half, but with no clear scoring opportunities.

The exception was Vitória de Setúbal´s first goal chance. The ball is crossed from a free kick and lands at Pedro Pinto’s feet, who makes a great effort to give his team the goal, resulting in a brilliant save by Rui Patrício.
The second 45 minutes started with a bang, as Adrien Silva takes advantage of an unfinished clearance with an amazing volley outside the box, only to be stopped by the crossbar.

Sporting maintain their dominant form as another opportunity arises following a simple pass by Bas Dost and Podence’s strong finish, cut off by Trigueira’s gloves.

A corner for the home team saw Dost getting his head on the ball, but Pedro Trigueira easily secures it in his hands.

30 minutes until the end of the match and Jonathan Silva delivers a giant throw-in into the box, met by Mathieu’s unexpected bicycle kick. But the keeper manages to cling on to the ball.

In the 65th minute, Seydou Doumbia enters the pitch for his official debut as a Sporting Lisbon player and instantly shows off his attacking prowess with a left-foot attempt, although it went well over the goal.

Immediately after, Dost heads a crossed ball and sets up a chance for what would have been a brilliant headed goal for Doumbia. But the Ivorian attacker missed by a fraction, as the ball scratches the crossbar and goes out of play.

Bas Dost tried the headed goal once again from a corner kick, but once again failed to deliver.

As we approached the final whistle, Sporting delivered a good ball from the halfway line. Bruno Fernandes received it, and tried to put it inside the net, but yet another brilliant save by Trigueira.

Debutant Doumbia also tried the acrobatic shot, but the ball just goes past the left post.

The home fans despair at Sporting’s lack of aim, but five minutes until the end, a penalty was awarded to the Lions. Dost placed the ball to the right, on the opposite side of the keeper, and the stadium erupts into cheer.

The away team tried to retaliate with a headed shot by Paciência, but the ball sailed wide.

The match ends with Sporting Lisbon feeling satisfied, but somewhat annoyed at their lack of goals. Sporting, having won both league matches, are now in the lead. But they will still have to wait and see how the other games go in this second round.