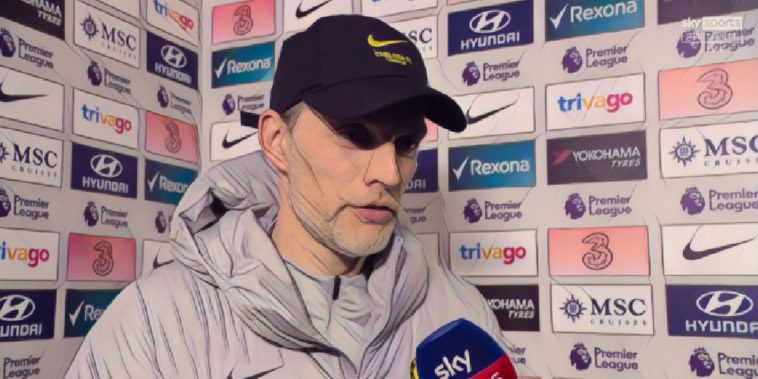 Thomas Tuchel was critical of his side’s ‘dramatic mistakes’ as Chelsea were beaten 4-2 in a London derby against Arsenal.

Arsenal took the lead in the 13th minute, Eddie Nketiah capitalising on a woefully under-hit backpass from Andreas Christensen, the former Chelsea youngster seizing on the ball, taking a touch to beat Malang Sarr before slotting past Edouard Mendy for his first Premier League goal of the season.

The lead would last just four minutes though, Chelsea pinching the ball in the Arsenal half before Timo Werner’s tame effort took a decisive deflection off the heel of Granit Xhaka, the midfielder turning his back on the ball as the German struck.

Emile Smith Rowe scored the winner in this fixture last season, and in the 27th minute, the midfielder restored Arsenal’s lead as he rolled the ball beyond Mendy from 18 yards following a swift counter attack from the Gunners that saw Bukayo Saka and Martin Odegaard heavily involved.

However, just five minutes later and Chelsea were level again. Timo Werner dispossessed Ben White high up the pitch before Mason Mount took control of the ball. He whipped a cross in from the left, with Cesar Azpilicueta getting across his man to poke home from inside the area.

Arsenal regained the lead 11 minutes into the second half, and once again another misplaced pass was pounced upon by the visitors, Nuno Tavares found Nketiah in the middle before the 22-year-old had a couple of opportunities before eventually poking the ball beyond Mendy following some really poor defending from the hosts.

Both sides had chances to add to the goalscoring in what was an end-to-end encounter at times, and as the game ticked into added time, Arsenal would be awarded a penalty to make sure of the points as Azpilicueta had a hold of Saka in the box. The England forward was abused after he missed from the spot in the Three Lions Euro 2020 final defeat, though he stepped up and coolly despatched from 12 yards this time around, much to the delight of the amassed Gunners faithful behind the goal.

Arsenal are unbeaten in each of their last three Premier League games at Stamford Bridge.

Their longest upbeat run at the home of Chelsea since 2004. pic.twitter.com/ZPsMupN4fl

The defeat now means that Chelsea have lost three home games on the bounce for the first time since 1993, and speaking afterwards, a spiky Thomas Tuchel was critical of his side’s defending.

“Well, we scored five goals and lost 4-2. Three own goals, two regular goals for us and one for Arsenal and that makes it 4-2,” he told Sky Sports.

“I don’t know if it’s a defensive lack of conviction if we have ball possession and invite these kind of mistakes for the opponent to score. I cannot remember any mistake in our favour of this calibre, of this quality. We don’t get these goals, we give these goals away here in consecutive games and you cannot win Premier League matches.”

Asked if his side had missed the injured Antonio Rudiger, he simply said: “Of course”.

The German then continued to highlight his side’s individual mistakes.

“We always had a platform today, but was nowhere near good enough. First half, they changed the tactic three times. Also, and I include myself, we were not on the highest level but individually, how we concede the goals it’s dramatic mistakes, individual mistakes, like the first goal, the third goal and the fourth goal, all individual mistakes, and it’s very hard if you start with three zero for the opponent.

Romelu Lukaku was handed a rare start but was hooked after an anonymous performance, though Tuchel refused to discuss the Belgian’s display: “No interest in talking about an individual player after a team performance like this,” he said.

Asked what he could do after a performance like this one, he said: “I don’t know, I actually don’t know,” before walking off.