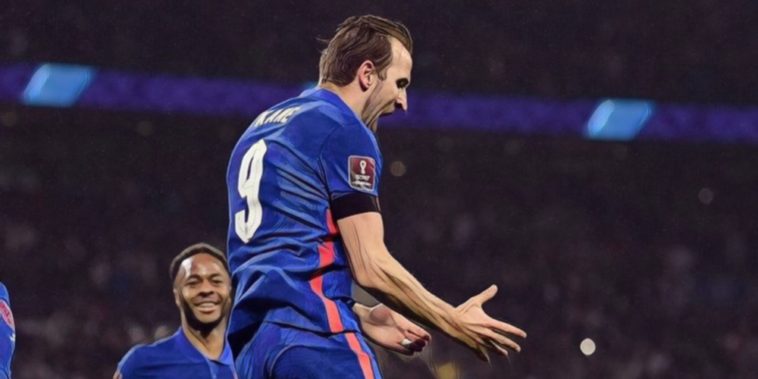 England moved to within just a point of World Cup qualification after a brutal first-half showing saw them run out 5-0 winners over Albania at Wembley on Friday night.

The European Championship finalists had stumbled to a 1-1 draw at home to Hungary in their last fixture back in October, yet produced a far more clinical display this time around to all but secure their place in Qatar next winter.

In a blistering first-half, skipper Harry Kane put his Tottenham troubles behind him to net a perfect hat-trick, including an acrobatic volley to seal his treble on the stroke of half-time, with Jordan Henderson and Harry Maguire also getting on the scoresheet to wrap up the victory inside the opening 45 minutes.

Speaking after that impressive showing, manager Gareth Southgate was particularly pleased with the performance of hat-trick hero Kane, the striker having quietened some of the doubters amid his underwhelming form at club level, which has seen him score just one Premier League goal this season.

“Form is always temporary,” Southgate said. “What pleased me most was his all-round performance. We know he’s going to score goals. I liked the way he was aggressive in his hold-up play and running in behind. His link play was on song.

“We had good movement around him, particularly from Raheem Sterling and Phil Foden. We’ll make a decision on the team on Monday. There are a few thousand England fans going to San Marino. We’ve still not qualified for the World Cup. We want to put a performance on.”

Another under-fire player to have shaken off recent criticism was Manchester United captain Maguire, with the centre-back producing a ‘very good’ performance, capped by his early header.

“He’s been a fabulous player,” the England manager added. “He’s been rushed back from injury. You get lots of players who hide in the treatment room.

“I’ve got massive respect for him. You know you can go into a game not 100% fit and you’re always judged as if you’re fit. He understands that. I had a huge chat with him earlier in the week. His performance tonight was very good.”

That being said, United legend Roy Keane was left unimpressed with Maguire’s celebration following his goal, labelling the former Leicester City man ’embarrassing’ amid his dismal form at Old Trafford.

“He puts his hand to his ear. He’s like shutting the critics up but I think that’s embarrassing,” Keane said at half-time on ITV.

“He’s been a disgrace the past few months for Manchester United. He thinks he scores there, he’s going to shut his critics up. Embarrassing.”

The Three Lions can wrap up their qualification against San Marino on Monday evening, with just a draw needed against the international minnows.