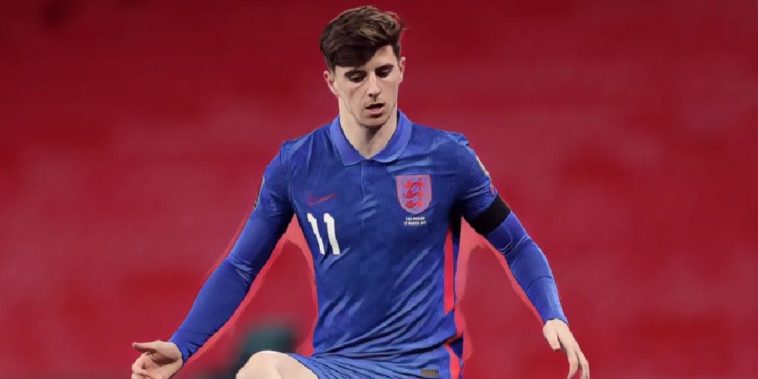 Gareth Southgate is pleased with the options at his disposal ahead of this summer’s re-scheduled European championships, praising Luke Shaw and Mason Mount in particular.

England kicked off their World Cup 2022 qualification campaign with a comfortable 5-0 win over European minnows, San Marino, on Thursday, Southgate offering opportunities to some lesser-used players against the perennial whipping boys.

The Three Lions travel to Tirana this weekend where they will take on Albania before hosting Poland next week, where a number of England regulars are expected to be restored to the side.

One player who could be set for an outing is Manchester United left-back, Luke Shaw, the former Southampton defender enjoying an impressive return to form in recent months to regain his place in the England squad, his last appearance for his country coming back in the side’s UEFA Nations League game against Spain in 2018.

Speaking ahead of the game against Albania, Southgate has been impressed with Shaw’s recent resurgence, praising his ‘ambitious’ attacking which has been combined with some astute defensive displays.

“He’s been very good,” Southgate said of Shaw at his pre-match press conference. “Luke played in the first Under-21 game I took charge of. There’s never been any doubt in our mind about Luke’s quality.”

“He has obviously suffered from injuries and had to withdraw from a few squads but it has been great to see him playing on the front foot as a full-back with his defending and he’s been really ambitious with his attacking. He looks like he’s in good condition to drive forward, he’s got excellent quality with the ball and it’s a good moment for him.

“He’s aggressive against his wingers, he’s difficult to play against one-v-one, he’s getting better with his cover defending for his centre-backs. He’s got to find the level he’s shown at his club and play his game.”

Mason Mount is another player who has established himself as an integral part for club and country over the last 18 months, though the Chelsea star faces stiff competition from the likes of Phil Foden, Jack Grealish and James Maddison for a creative role in the international setup.

Mount did however operate in a deeper midfield role alongside long-time friend Declan Rice against Iceland back in November, a role which Southgate feels the ‘intelligent’ 22-year-old is capable of playing in the future, while also praising the depth he has in midfield.

“They did very well in the game we played against Iceland,” Southgate added. “Obviously that deeper position, Mason doesn’t play for his club but I think it’s possible for him. He’s a very intelligent player, he can play four, eight or 10. I think he would be able to adjust as required.

“There’s no doubt the balance of those two is good. But equally, James Ward-Prowse was good (against San Marino) the other day and Kalvin Phillips is in excellent form as well.

“It’s an area on the pitch where we are starting to get some options. It’s been great to have Jude (Bellingham) with us as well. Like almost every position on the pitch we have a lot of competition for places.”